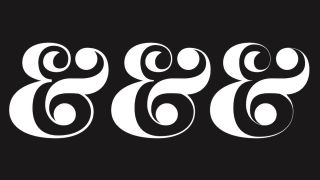 The best ampersands tell you a lot about a typeface. Thanks to its unusual structure, the curly symbol that's a substitute for 'and' is the character that can make or break a typeface for the type-conscious designer. It's a character that asks the typographer to make certain creative decisions above and beyond the A to Z letter set, the numerals and standard punctuation, and the care that goes into an ampersand is often indicative of the attention to detail that has gone into the typeface across the board.

As a designer, the ampersand can be your plaything. It's the maverick character in the set, the one that really tested the typographer in its creation, and the one that can bring the right atmosphere to a project when used at a large scale.

If you'd like to assess the ampersands in a range of fonts, have a rummage through our rundown of the best free fonts around.

What is the ampersand?

While today it is considered a punctuation mark, the ampersand used to be the 27th letter in the Roman alphabet, following Z. People would say 'X, Y, Z and per se and' as the figure itself means 'and'. 'And per se and' was shortened into a word in the 18th century and today we have 'ampersand'. Its form derives from the Latin word for and, 'et'. In some ampersands – commonly the italic form – this combination is more clearly seen than in others, and the character has evolved its highly unique form.

Read on for our pick of the best ampersands of 2020.

Ampersands don't come much better than the refined and classic forms found in the Baskerville typeface family. Originally designed in the 18th century by John Baskerville, in Birmingham, England, it was influenced by Bodoni and Didot. In the Regular version of the typeface, the ampersand feels gentle yet authoritative, and the ampersand in Alan Fletcher's iconic V&A mark is very similar to Baskerville's. Move to Baskerville Italic and a strong, creative and cursive feel emerges the letters E and t shining through more clearly.

Mention ampersands and for some designers, it's Miller time. Although designed in 1997 by Matthew Carter, this is a typeface based on the sturdy, all-purpose Scotch Roman fonts of the early 19th century. Select Miller Display Italic, however, and you'll unlock an ampersand that's as beautiful and flowing as a Highland spring. Somehow, the slightly extreme elevation of the top right ligature doesn't feel out of balance at all.

Elegant, and a little extreme, no typeface better reflects the modern penchant for high contrast serifs than Bella, created by Manchester typographer Rick Banks of the F37 Foundry. Newly available as Bella Pro, this font family boasts an ampersand that oozes luxury in both regular and italic forms – it's a character that looks like it's lounging around in an expensive cocktail bar, waiting for the action to kick off.

This redrawing of William Caslon's classic English typeface from the 17th century was created by Dalton Maag in 1991, and its six fonts deliver a swirling ampersand drawn in a style usually reserved to italic versions of a typeface. Despite its deliberately over-egged curves, it still feels anchored and well-structured. It's hard to go wrong with a Caslon. The one shown here is King's Caslon Display Regular.

Designed in 1974 for ITC by Joel Kaden and Tony Stan, American Typewriter was inspired by classic slab serif mechanical typefaces. However, unlike its influences, it isn't monospaced and has a funky, fun feel reflecting the decade in which it was born. This is perfectly encapsulated in its playful ampersand, and comes across throughout its weights and styles. Doesn't it resemble a cat dangling a paw, ready to swipe a toy mouse nearby?

This free font, created by Santiago Orozco, was inspired by early modernist typefaces as well as typewriter fonts and extends the designer's original Josefin Sans into new areas. The ampersand found here is tall and unusually thin, but still well-balanced. It has the feel of a symbol or an icon, with a sense of motion, and looks almost as though it's posing the question: "And?"

There are numerous typefaces called Bronx, but look out for this one by Jen Wagner Co, which extends her very angular serif Manhattan with a softer-feeling outline font. It's so inexpensive that we've seen it listed as a free font but $6 is more than worth it for the ampersand alone. With languid curves, the outline gives it an upholstered air – comfortable without ever seeming over-stuffed or stuffy.

Australian designer Monib Mahdavi's typeface Flux brings us an ampersand that doesn't mess around – it's clean, lean and flexible. Unlike many on this list, it's a good candidate for body and display uses. We like the way that, as a form, the E and t hold together rather stiffly, like new dance partners who are serious about not putting a foot wrong.

Heavily influenced by traditional typography and wanting to bring its many nuances to digital type, Jonathan Hoefler's Hoefler Text was an ambitious launch back in 1991. Despite a heavy nod to the classics, Hoefler was an innovator and his ampersand, here seen in italic, is as individual as its designer. It really feels like it has three distinct strokes – carefully and deliberately placed, and perhaps that's how it should be used.

Oh, baby, yes! Here's a typeface with an ampersand that needs a double garage to park in, and then some. Like the prehistoric pachyderm it's named after, Mastodoni brings scale but also borrows from the elegance of the traditional typeface that inspired it: Didone. Here's a worthy, extreme contrast competitor to Bella, which is all about luxury and excess.

Like a boomerang that comes flying back to you with unexpected force, Windsor's ampersand has a ligature that swooshes around overhead in a way that sets it apart from the rest. It's an example of an ampersand that might just be better than the typeface it comes from – Windsor is often used to say 'old style' and thus has a rather cloying feel in general. Thank goodness for its exuberant ampersand.

Designers of script fonts tend to go wild with their ampersands but Mediengestaltung held things together rather well with their free font Chopin Script producing something elegant, restrained, unique and – yes – harmonious. The typeface has some lovely swirling capital letters, while the ampersand brings a sense of motion reminiscent of a bow delicately bringing the strings section to life.