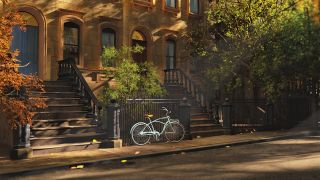 Cloud rendering has been the big issue for many artists, particularly those working remotely or in small studios. The big player in the market is Google Zync, but newcomers such as the UK’s Yellowdog are also catching on. To uncover how feasible it is, we caught up with lighting and compositing freelancer Eva Ng, who turned to the cloud to hit deadline on her final project at Gnomon School of Visual Effects.

Her project, NYC Village, is an information heavy still-life scene of a New York street – beautiful but problematic when rendering on modest hardware. “The image was broken down into foreground and background render layers, but because I had trees in my scene, it became very intense,” explains Eva. “When I did initial render tests, the renders were coming in at over 18 hours on my Apple Macbook Pro Retina, as it only had 16GB of RAM on 2.80Ghz i7. I cut down on all my render settings – geometry, shading, sampling – everything I could think of.”

But it still wasn’t enough and as many artists find, if you’re not at a major VFX studio, access to super-powered hardware isn’t an option. Eva looked into cloud rendering as a solution and Google’s Zync platform was recommended. The idea is simple; you send render-intensive work to the cloud, where you can make use of the power and scalability of Google to receive high-quality results at speed.

Eva judged her NYC Village project would have taken 18 hours to render but with Zync it took four hours, and this included rendering the background and foreground. “I was immediately amazed by the power and time I had saved – I could use that extra time for other developments and iterations, which would allow me to explore more options and be more creative,” explains Eva.

Cloud rendering isn’t completely new, but what sets Zync aside from other ‘in the cloud’ renderers is the ‘on demand’ nature of the performance; when you don’t need it, there’s nothing to pay for – no bills, no overheads.

More so, Zync allows you to choose how many machines and cores are needed and the rough cost of the project is shown up front before any work is done. “I also discovered in my account settings that I could set a price limit, just in case I was worried about going over my budget – that kind of thing is really useful when you’re a freelance artist and you’re working on a budget,” Eva says.

The advantages of using cloud services also go beyond cost. As the local hardware isn’t being used to render, you’re free to work on a second project while the first is rendering. “I could work on two projects simultaneously, massively increasing my efficiency as a freelancer,” says Eva. “That means more work, more income, and a happier client!”

Zync has changed Eva’s entire approach to freelance projects: “For individual artists like me, it has allowed for the production of more diverse work in a shorter time frame,” she explains. “As technology continues to advance, with high-quality images heading towards the 4K and 5K resolution, artists like myself are definitely going to need this powerful tool to cope with the demand. Not to mention that the 3D industry has become so remote with many offices around the globe, Zync might even start to help make savings on travel time!”

Eva believes that by offering the power of affordable cloud rendering to students and graduates, Zync has condensed their heavy workloads, allowing them the ability to streamline their workflow process with cutting edge results: “It was not uncommon to see students fighting for a computer to render at school,” she laughs. “Or, if the network was too busy we had to render locally, and that would become an issue for those working on heavier scenes. During those times, I would dream of a service that was this streamlined and user friendly – it would have come in so useful during finals and deadlines.”

The successful take-up of cloud rendering has had the knock-on effect of support from software developers, for example Nuke, V-Ray, Solid Angle and RenderMan all support the renderer. And now a new Zync Render plug-in for Maya means users can render 3D scenes on Google Cloud with ease – and legally.

Users can now make use of up to 500 machines per account, scaling to 32,000 rendering cores. Maya customers could see up to a 10x improvement in efficiency due to the new system. This should allow multiple rendering jobs to start instantaneously, cutting waiting times and accelerating production.

As part of the announcement of Maya’s optimisation for Zync, Autodesk senior vice president Chris Bradshaw said, “Cloud-based rendering has opened new doors for creative facilities of all kinds, making it easy to scale rendering to project demands, and we’re excited to bring this new value-add to customers. Maya customers can now scale productions quickly and efficiently while also adding rendering capacity – without additional hardware. And Maya is only the beginning, as our teams continue to explore how we might expand this functionality to other M&E products.”

This surely means 3ds Max and the newly acquired Arnold should follow suit. But ultimately it means artists like Eva can make use of a high-end render capability to reduce costs and time.

This article was originally published in 3D World magazine issue 210. Buy it here.