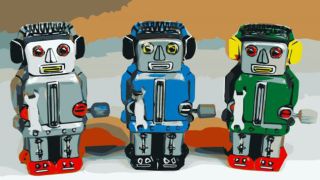 During my time as a graphic designer, I've experienced nearly everything – short of physical violence – that working life can throw at you: recessions, legal disputes, defaulting clients, and of course, the thrill that comes with completing a successful project.

But two events – both of which turned the practice of graphic design on its head – stand out as life changing. The first was the arrival of the Macintosh computer. For all practising designers at the time, computerisation necessitated an extensive rethink of the craft: no more mechanical artwork, no more paste-up, no more typesetters, no more expensive retouchers.

Many of the tasks previously done by repro houses were taken over by designers sitting in front of computer screens. It was the beginning of a new age of digital self-reliance and a period of massive reorientation.

The second event was the arrival of the internet. Here was a new way of thinking about, and making design. Suddenly, designers no longer had complete control over how their work was received. The inability to control browser use, screen ratios and fonts had a decisive impact and old rules such as the number of characters per line length rule became redundant.

Even the users themselves could mess with the appearance in ways unthinkable to designers trained in print design, where layouts were fixed once they left the designer's hand.

These two events threatened to shrink the role of the designer, but the opposite happened. There are now more graphic designers and students than ever before. Design is a global industry embedded in, and inseparable from, business and culture. For many, graphic design is as much a lifestyle choice as a career choice. We do it because we love it.

The rise of automation

If design and designers can be said to have benefited from these two shocks in the long run, there are concerns that the craft and the profession might not survive quite so well. Is design about to meet its Uber moment? Is AI about to take on the role of the designer? Is the surge towards a fully automated world about to engulf design?

It might seem that automating the design process is impossible. You might assume that the creative imagination is the least likely arena to be taken over by machines, that bots are for routine production, not conceptual thinking. In reality, the process is already underway.

The automation of countless realms of everyday life is already at an advanced level: entire factories are operated by robots; legal contracts and stock market trading are routinely done by bots; automated warehouses, ATMs, and user operated supermarket tills mean fewer jobs in industries once regarded as high volume employers; driverless vehicles signal the end for the millions of people who drive for a living. Why should design be any different?

In the book, Inventing the Future, Nick Srnicek and Alex Williams state that: "anything from 47 to 80 per cent of jobs are likely to be automatable in the next two decades." They also note that the "roboticisation of services is now gathering steam, with over 150,000 professional service robots sold in the past 15 years. Under particular threat have been routine jobs – jobs that can be codified into a series of steps."

The demise of web design

Surely this lets design off the hook? We can't expect machines to make the irrational, gravity-defying leaps of imagination that designers make, can we? What about the designer's ability to capitalise on accidents and unforeseen coincidences? Surely this sort of cognition is beyond the bot?

Not so. We live under the dictum that anything that can be automated will be automated. And nowhere in the design world is this idea more advanced than in web design. In a post titled Why Web Design is Dead, on the website UX Magazine, designer Sergio Nouvel notes the following.

"Most of the content you see on the web today is run by some framework or service – WordPress, Blogger, Drupal, you name it. Frameworks provide you a foundation and shortcuts so you spend less time struggling with the creation of a website, and more time creating content. As a consequence of the ubiquity of these frameworks, a world of free and paid templates lets you start with a professional-looking design in minutes. Why hire a web designer if you can achieve a fairly acceptable design for a fraction of the cost using a template?"

The Grid, a San Francisco and Berlin-based startup, was the first to announce that it has created a website builder that uses artificial intelligence. It enables users to upload images and text or make use of its library of colour combinations and images, and then, using AI, it performs all the key design functions: positioning of images, placement of text, selecting colours and sculpting a unique, customised website. The Grid says it doesn't use templates, but 'layout systems', which it claims offers greater flexibility.

With The Grid, if you don't like what you see, you hit the Redesign button and in seconds a different layout appears. The Grid's promotional video gives the impression of effortless, nearly instant success. It's a seductive pitch. But not everyone is impressed.

Various webinars offer a less convincing glimpse into The Grid's AI approach to web design. Watching these critical takedowns, I was reminded of the early days of DTP design – gap-toothed typography and bitmapped images. But the painful DTP birthing phase didn't last long. Designers mastered the software, the software improved, and so did computing power. You wouldn't lose money betting on AI websites becoming much better in the future.

It's easy to see why clients would be attracted to this grit-free process. There's no more time spent listening to pesky designers defending their design decisions, no more waiting around for new designs to arrive. And here's the clincher: no more redesign fees. Instead, clients inhabit a fragrant world of endless iteration and seemingly limitless choice.

The Grid is not alone in its quest. In September 2016, the website Tech Crunch reported that Canva, a design platform for web and mobile, had announced a new infusion of $15 million in funding and a doubling of its valuation in 12 months. This added capital was reported to have brought Canva's valuation up to a whopping $345 million.

What makes Canva so attractive to the guys with the money is the fact that it can be used by non-designers. Canva claims it only takes 23 seconds to become a proficient user of its software. 10 million people are allegedly using it to design business cards, posters, presentations, and graphics for social media.

Looking at the formulaic design featured on the site, it's hard to take seriously claims that 'anyone can become a designer' with Canva. It's easy to laugh at some of the work these sites post as examples – most of it looks as if it has been designed by someone on autopilot. But will we be mocking in five years' time? When we look at what is happening in AI, it seems foolish to dismiss attempts to automate design.

When I talk to designers about the likelihood of AI taking over the tasks of designers, I'm met with scepticism. But this strikes me as short-sighted. In a detailed account of Google's work in AI, published in the New York Times Magazine, the journalist Gideon Lewis-Kraus writes about the company's use of artificial intelligence to transform Google Translate. Anyone who has used the translation service will know that its results are hit and miss, always require correction, and are rarely idiomatically correct.

All that is changing. In its new AI-driven version, Google Translate is producing astonishing results. Developed by the Google Brain team, 'artificial neural networks' (much like those in our skulls) are offering an alternative to traditional computer programming and represent a move towards self-learning machines. Using these networks, robots can then acquaint themselves with the world via trial and error in the same way that children do, giving machines "something like human flexibility."

Lewis-Kraus reminds us of Alan Turing's famous test for an artificial general intelligence: "A computer that could, over the course of five minutes of text exchange, successfully deceive a real human interlocutor. Once a machine can translate fluently between two natural languages, the foundation has been laid for a machine that might one day 'understand' human language well enough to engage in plausible conversation."

If Google's new translation service is close to fulfilling Turing's criterion, then it's not much of a stretch to imagine AI tackling more sophisticated design problems than shifting elements around on a webpage.

Most of the everyday design we encounter can be broken down into a simple set of principles that can be codified, and it seems highly probable that a machine can learn the rules of typography, the golden ratio and the rule of three. And it's no gamble to assume that cost-culling businesses will latch onto the money saving benefits of AI design.

What should designers do? AI-driven design already has the potential to remove some, or most of the production based tasks that designers do. Need 100 web banners for a global ad campaign, all with different information and numerous different languages? No problem. Robots capable of handling such routine tasks will result in fewer design production people.

But will the sharp end of design be affected? Eventually, yes, and just as human beings have learned to do since the introduction of industrialisation, we must adapt. It's my belief that designers are well equipped to do this. Teaching flexibility and a willingness to learn may be the biggest challenge facing the world's design schools.

Of course, this doesn't only apply to design. In the information age, we may be looking at a world without paid work. This takes us into the political realm, and subjects that governments are avoiding. It poses questions such as adopting a basic income, and the relearning that will be needed when the post-industrial world is replaced by one of unlimited leisure. These topics are discussed in academia and future-gazing think tanks, but we all need to be thinking about them sooner rather than later.

Halfway through writing this, I had a sudden, sobering glimpse into a machine-driven world. My five-year-old iMac died. The screen went black, none of the usual remedies helped and it was Christmas, so there was no chance of emergency repairs. It was a personal mini-disaster. But this is what happens to machines: they break. Perhaps their fallibility is the only thing between us and an AI future.