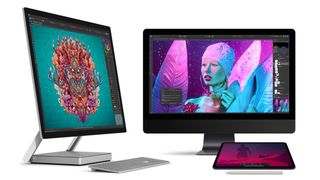 Affinity users have been champing at the bit for updates to its software suite, and this week their patience has been rewarded. Not only has Serif announced the launch date of Affinity's desktop publishing app, today it also revealed the biggest-ever updates to Affinity's Designer and Photo tools.

The v1.7 upgrades see Affinity push the performance of its apps even further thanks to the introduction of GPU compute acceleration, HDR monitor support, and a rewritten memory management system. Improvements are being rolled out across across Mac and Windows versions of the tool, as well as the iPad version – already at the top of our list of the best iPad apps for designers.

Not only that, but the Designer and Photo apps are now optimised to work on the incredible new Apple Pro Display XDR monitor, as well as being tweaked to run faster than ever on new Macs.

The good news keeps on coming for Mac users as Affinity revealed that they will now be able to enjoy end-to-end Metal compute acceleration. In terms of how this pays off in the software, all raster layer and brush operations will work 10 times faster than before. The support of multiple GPUs, either as internal or externally connected units, can also take these performance gains further.

Windows users aren't left behind though. Serif promises that a hardware acceleration is on the way for them too, and in the meantime it's delivered a rewritten memory management system that sees its tools running up to four times as fast as current speeds. Not only that, but Dial and Pen support for Microsoft Surface devices have been upgraded.

As for the individual tool upgrades, Affinity Photo has been given an improved RAW processing engine that will load files faster. This will also benefit the tool's new demosaicing algorithm, deliver more effective noise reduction, and assist with hot pixel removal and wide colour space development.

Affinity Photo users are also treated to a rewritten brush engine that includes all-new multi-brushes. A 32-way symmetry mode and nozzle rotation powered by shortcut keys accompany the launch of these brushes.

Completing the upgrades to Affinity Photo are improved batch processing, a new assets panel that allows creators to simply drag and drop commonly used elements, and an overhauled layers panel.

"Using Affinity Photo with an HDR monitor offers a simply stunning experience," says Serif Managing Director Ashley Hewson. "It's amazing the detail and dynamic range the latest SLR cameras capture when shooting in RAW, and Affinity Photo now offers the opportunity to actually see all that depth while editing on an HDR monitor.

"But this isn't just for high-end photography. As more and more graphic content is being consumed on HDR displays, it will start to become important that designers are using an app which can both work in a 32bit colour space and render the results on an HDR monitor. Affinity Designer is the first professional graphic design application to do both."

Speaking of Affinity Designer, the popular tool at the heart of many a vector art tutorial has been gifted new isometric tools that allow designers to work on any isometric plane. This feature will also fit existing elements to a plane with a single click.

Not only that, but vector shapes can now contain an unlimited number of strokes and fills. Users can control how these are blended together, and there is complete freedom to interleave different attributes.

Almost all of Affinity Designer's vector art tools have been given an improvement, too. A wider selection of lasso modes, a sculpt mode for the pencil tool, and a new point transformation tool are just a taste of the many updates to hit the software.

"This update isn’t only about the big new features and performance gains – we've also made literally thousands of little tweaks and improvements to both apps based on all the feedback we get from our customers every day," adds Hewson. "It's a lot of these little enhancements which add up to mean both Affinity Photo and Affinity Designer are more productive than ever before."

Thankfully, one of Affinity's tastiest lures, its one-off fee, is still present and correct. The new 1.7 versions of both Affinity Photo and Affinity Designer are available now with a 20% discount ($39.99 desktop, $15.99 iPad), while existing users can download the updated versions for free.