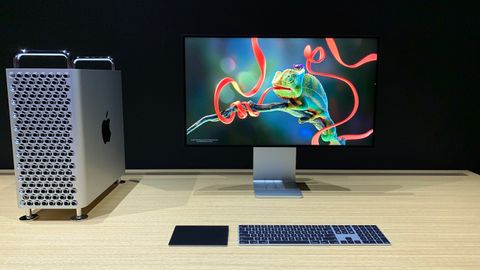 This is a first look at the Apple Pro Display XDR to give you the chance to see what the new monitor is all about as soon as possible. We'll be expanding and upgrading this review shortly with more information and a score.

Apple’s just made a monitor that costs $4,999 – and you can spend a further $999 to attach a fancy stand to it. However, the brand is claiming that its new Pro Display XDR monitor is going to save the creative industry reams of time and money, offering some key features that are only available on reference monitors many times its price.

Read our news story on the release of the Pro Display XDR monitor for more about the upcoming release, and if you're looking to bag a bargain on a non-Apple monitor, then don't miss our post on what to expect from Amazon Prime Day, but here, we get up and close and personal with Apple's new monitor. Just how good is the Apple Pro Display XDR in real life?

Let’s explain something off the bat: XDR stands for Extreme Dynamic Range, as it ‘goes beyond’ the traditional world of HDR.

That’s made possible by two key elements: a backlight array of custom-tuned blue LED lights that will locally dim on the screen to offer real contrast between dark and light scenes. They’re so bright that they’re capable of running at 1000 nits indefinitely, and can boost up to 1600 nits.

That’s a pretty impressive number – and to keep the display pumping out such high brightness, allowing video content to be assessed frame by frame without a drop in performance, Apple has designed an innovative heat sink on the rear.

The small, round ‘bubbles’ on the back are made in such a way that they disperse the heat more efficiently than ever (although, visually, they appear to be more like a cheese grater).

The brightness and HDR capabilities of this 32-inch monitor are, indeed, impressive in real life – the 6016 x 3384 resolution is so pin sharp that even practically pressing your nose to the display yields little in the way of pixelation.

We looked at the monitor next to a ‘normal’ one and the difference in brightness and colour reproduction was stark. Of course, Apple was using imagery that it knows will show off the performance of the Pro Display XDR well (we viewed the live video of the traditional Mac wallpaper mountains), but the HDR quality was truly impressive.

So were the contrast ratios here – looking at a recently-snapped photo from a studio showed incredible clarity for a high-resolution photograph, with the image appearing very close to the glass on the screen.

Even viewed off angle, the picture quality remained and was easy to see – Apple said it had worked hard on the anti-reflective coating and the sideways viewability of the monitor, and it really showed.

The colour reproduction here is 10-bit and P3 wide gamut, and a couple of creative artists we spoke to were gushing about the sheer depth of colour available on the new Pro Display.

The image we saw was purposely oversaturated, but for those grading colour, this is going to be a monitor that can really stun. We doubt it will be as good as a ‘true’ reference display, given it’s around eight times cheaper, but we can’t help but feel it will get awfully close in a number of key areas. If you want a quality monitor for photo editing, this is looking to be a very worthy contender.

The Pro Display XDR is a little boxy and angular in design – it’s brutal in its angles, but the thinner bezel does really help enhance the look.

You can chain up to six of these monitors together from the new Mac Pro, and that thinner bezel will help make it easier to use multiple options at once.

The $999 stand was something we didn’t get to check out, although we did get to see an exploded diagram of what was inside – and it’s another feat of engineering in there. Whether that’s going to be worth nearly a thousand dollars to anyone outside of a high-end design studio, remains to be seen.

Even though it’s supposed to have incredible counterbalance and be lightweight to use (Apple wouldn’t let us touch the display), it still will need to be hugely useful to justify that price tag.

It’s pretty likely most creative professionals will want the Pro Display XDR, simply because it looks slick, has a clean sharpness to the screen and is brilliant at colour reproduction. The HDR modes really add something to the mix in terms of performance, with the peak brightness combining will with dark blacks washing all around.

The price will, obviously, stop many in their path to buying this machine as it’s more expensive than most high-end PCs out there – see our pick of the best computers for graphic design for other options for a range of budgets. But the large 32-inch visage, combined with the enhanced sharpness 6K brings, means you’ve got a lot of real estate to play with for your latest project – we just need to stack it up next to a true reference model to see how it measures up.

The Pro Display XDR is expected to ship in October 2019. Head over to our sister site TechRadar for a first look at the Mac Pro and all the latest news from WWDC.