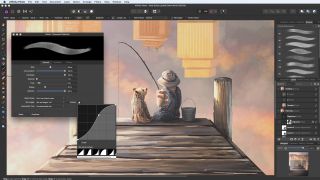 Version 1.6 sees a big performance boost across both apps and the option of a light UI among its headline updates. New features also include brush stabilisation and enhanced document handling. (Scroll down for the full list of updates.)

This offer closes on 16 November, so you’ll need to move quickly to get the free bundles. Simply follow the prompts in the app to claim the extra goodies.

Unlike with Adobe software, there’s no subscription needed for Serif's Affinity apps. They're a one-off purchase of £48.99 / $49.99 / €54.99 (subject to regional currency variations), and according to Serif, “the free content alone would cost more than the app, if bought separately.”

Affinity Photo and Affinity Designer for Mac are available to buy from the App Store, with full optimisation for macOS High Sierra. Windows users can buy direct from Affinity’s website.

Free trials are also available from the website – including for users who have trialled the apps before and were previously unable to download a second trial.