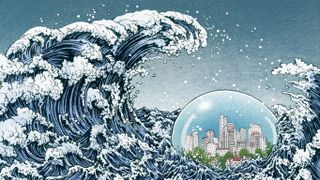 What did you do when you turned 30? Award-winning creative Yuko Shimizu saved up, swapped her corporate job in Japan for art school and became a globally acclaimed illustrator.

It didn't happen overnight. In fact it took three years to get the cash together. But as Shimizu – who counts Microsoft, The New York Times and iconic designer Stefan Sagmeister amongst her many collaborators – points out, you're never too old to achieve your dream.

"If America has a glass ceiling, Japan has a glass table," she begins, before explaining that a mentally abusive boss finally gave her the push she needed to abandon the safety of a regular pay cheque and study art for the first time, aged 34. "I was wearing jeans with 18-year-olds and faking it," she laughs.

Pursuing a creative career was a life-changing decision, but over the last decade and more Shimizu has built an inspirational illustration portfolio.

What has she learned in that time? Primarily that it's never too late to do what you want to do, whether you're 19 or 90.

"We never get younger than who we are today," she urges. "Start working on that dream today."

Here are seven of Shimizu's best tips for making it as an illustrator...

01. Take at least one small risk every day

"I'm not talking about jay-walking or stopping the bus where there's no stop," laughs Shimizu. "Some people have a signature style and every job is a variation of that. But repeating the same things over and over drove me nuts – that's why I quit my corporate job."

"If it's 50 per cent new I'll freak out and my client won't call again. But I do lots of small jobs. If I do 10, I can grow without taking too much risk. I know I'm on the right track."

Why? "Because there are always others who want to do it. When I turn down a job I always suggest someone else," she explains.

"When I moved from Japan, there were so many people who helped me along the way. Some of my professors gave me contacts, and said mention my name and they'll call you back. I don't know the way to thank all those who helped me, so I try to help those who need it now."

03. Always draw something a photo can't do

"Now that photography is good again, I've been finding that clients want photography," she says. "I sometimes seem to only get jobs when art directors think that photography won't work, so I always try and do something a photo can't do."

04. Avoid projects that will prevent a good night's sleep

Shimizu isn't referring to the all-nighters: "I mean things I'll be ashamed of," she clarifies. "Oil. Gambling. Everyone has something that's important to them – a job that means they won't be able to sleep at night. Don't do it."

05. A project isn't a success unless the client thinks so

Not all of her projects are showcased on her website. There are some projects where Shimizu feels both "proud and embarrassed" at the same time.

"But the bottom line is I worked hard and the client loved it. You can't make a personal masterpiece that the client doesn't want," she reasons.

06. Never work for free: it undercuts others

"As a professional you make mistakes, and learn and get better," says Shimizu. "But there are mistakes you don't need to make because other people made them for you already. In this case, me," she added, explaining that she once gave a persistent start-up a pre-existing illustration for free.

"They said I'd get exposure. Sometimes you do; sometimes you don't. This time I did – a lot. And then I forgot about it, until another illustrator contacted me saying she'd been asked to provide an image for free and asking what the deal was."

Shimizu realised she'd essentially told the client it never had to pay for art. "Artists are always willing to give their art for exposure. You get tricked into doing it. You feel like you're winning but you're actually losing. That's my story of shame. Don't ever do this. Artwork is called work because it's work."

07. Some things are more rewarding than money

"Whenever I have time I try and do charity work," says Shimizu. "It's a great feeling being an artist. If you're a professional and making a living, it's nice to take time off and do charity work. But if you're not, don't worry," she smiles. "Keep yourself on track for where you want to go and work your way there. Then you'll be able to make time for charity work."