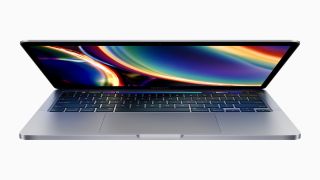 Earlier today we reported you might not have to wait long for Apple to reveal the new MacBook Pro 2020. Turns out we couldn't have been more right – a mere two hours later, Apple officially revealed its updated smaller MacBook Pro model.

There's no denying the shiny new device boasts some seriously impressive new features, including a significant boost in power and the addition of Apple's new Magic Keyboard. But we can't help but feel a bit disappointed that the new 13-inch MacBook is, well, still 13 inches. We'd rather hoped it would follow in its 16-inch sibling's footsteps by reducing the size of the bezels in order to increase the size of the display by an inch. Alas, the smaller model remains 13-inch, rather than 14-inch. You can't win them all.

But while the MacBook Pro 2020 screen might not quite what we had hoped for, the knockout specs suggest it may well soon bag a spot on our best laptops for graphic design list.

The base model starts at $1,299/£1,299 and features 256GB of storage (double that of the previous model) and 8GB of RAM. For the top spec, you're looking at $1,799/£1,799 for a brand new 10th generation processor (for "up to 2.8 times faster performance"). Also, for the first time on a 13-inch MacBook, RAM can be increased to a whopping 32GB. With these specs, we doubt the MacBook Pro will have issues with any creative software, from Photoshop to Final Cut Pro.

An updated keyboard might not sound like huge news, but by adding the Magic Keyboard to the 13-inch MacBook Pro, Apple has officially killed the much-maligned butterfly mechanism that has graced (read: plagued) its laptops since 2015. No matter what type of creative you are, if you've ever experienced the frustration of stuck keys on previous models, the new "scissor mechanism" keyboard could be reason enough to upgrade. It was certainly one of our favourite additions to last year's updated 16-inch model (read our 16-inch MacBook Pro review).