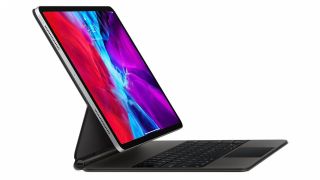 As well as revealing a brand new iPhone SE, Apple yesterday announced that one of its most anticipated upcoming products is now available to preorder. The Magic Keyboard for the 2020 iPad Pro was unveiled alongside the new tablet last month, and said to be arriving in May. However, it appears to be hitting the shelves sooner than expected. As of yesterday, the keyboard is available to order from the Apple Store, with units set to be delivered next week.

Apple has been touting the iPad Pro as a laptop replacement for years now, most (in)famously in its 2018 ads in which a young tablet user asks, "What's a computer?". While the ads were derided at the time, the tech giant has doubled down on the messaging – the message for the 2020 iPad and Magic Keyboard (below) proudly proclaiming: "Your next computer is not a computer."

But with the addition of a trackpad, it's the new Magic Keyboard accessory that could make those claims a reality – and make the iPad an even better option for creatives (check out the best iPad apps for designers). There's just one problem: the price.

The 11-inch version of the Magic Keyboard is $299, while the 12.9-inch is a whopping $349. To put that in perspective, you could buy an actual iPad for the same price. At $349, the 10.2-inch iPad certainly isn't a 'pro' tablet, but it's still a very capable machine. Still, if the Magic Keyboard is as transformative for the iPad Pro as Apple suggests, perhaps it's worth shelling out for. And there's always the trackpad-less Smart Keyboard Folio if you're after something a little cheaper.

Despite the price, the Magic Keyboard was definitely the thing that really got us excited about the 2020 iPad Pro. It magnetically attaches to the iPad, and the tablet sits above the keyboard with what Apple calls a "cantilevered design" (basically, it floats), offering way more flexibility in terms of viewing angles.

You can order the new Magic Keyboard now on Apple's website. If you're interested in picking up the 2020 iPad Pro (which definitely isn't a computer) or the Smart Keyboard Folio, check out the latest offers below.