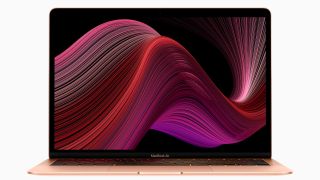 Apple has just announced a brand new MacBook Air that's available to order now, and it's a welcome update to the most lightweight of MacBooks that could make it your new favourite laptop.

The Air had, until recently, been feeling a little neglected, languishing behind the standard MacBook and Pro with outdated specs and not enough power to be seriously considered as one of the best laptops for graphic design. Recent updates to the Air have addressed this, but this latest version really puts it back in the game – especially if you're willing to pay extra for upgrades.

The new MacBook Air features quad-core processors for the first time, providing up to twice the power of the previous model and giving you the power you need for demanding design tasks. The base models come with Intel Core i3 and i5 processors; however there's an option to go with a punchier Core i7.

As well as more CPU power, the new Air also benefits from Intel Iris Plus Graphics that, says Apple, means up to an 80 per cent boost in graphics performance; again, an upgrade that designers are going to find pretty attractive. It features a 13-inch Retina display with True Tone – and can support external displays up to 6K – and anyone who's had an eye on the drama surrounding Apple keyboards over the past couple of years will be pleased to note that it has the Magic Keyboard, first seen on the 16-inch MacBook Pro, with Apple's improved scissor mechanism.

There's no doubt that this represents a massive upgrade to the MacBook Air range, and it's a lovely-looking slimline machine. Our main concern about it is that in its base configurations, it's probably just a little underpowered for a design laptop. If you want to put it to serious use you're going to want to upgrade when you order, and that's where things get interesting.

We've looked into the cost of upgrading a new MacBook Air to a more design-friendly spec with a Core i7, 16GB memory and a terabyte of storage; it'll set you back $1,849 (or £1,849), while a similarly-specced 13-inch MacBook Pro would set you back $2,399 (or £2,399). Now, that's not a like-for-like comparison; the Pro has a Touch Bar and a more powerful i7 among other improved features, but we're willing to bet that plenty of designers would be happy to save $550 on a machine that's almost as good as well as being beautifully portable.

The new MacBook Air is available to order now for delivery next month; we'll take a closer look at it soon as we can get our hands on one; in the meantime you can find out everything you need to know over at Apple.