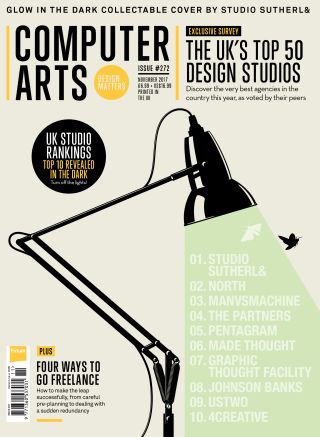 Picking the top 50 studios out of a pool as rich and diverse as the UK design industry is no mean feat, and putting them in a meaningful order is trickier still.

Computer Arts' method for deciding its annual UK Studio Rankings is simple enough: it’s all about peer reputation. The Players’ Player Award, if you like. And judging by the feedback the team has received, it genuinely means something to have the rest of the industry agree that you’re on the top of your game.

The newest issue of CA boasts the magazine's fourth UK Studio Rankings, providing a fascinating snapshot of UK design over that period. It features the steady performers, risers and fallers, and the occasional young pretender out of left-field that wows everyone.

As in previous years, stalwarts such as Pentagram and The Partners rub shoulders with smaller boutique outfits, such as previous winners Graphic Thought Facility, Made Thought and North.

This year’s rankings-topper, Studio Sutherl&, is one of the smallest and youngest: a two-person outfit, three years old, powered by wit and ideas.

This venture may be fresh, but Jim Sutherland himself is a veteran – cutting his teeth at The Partners and HGV before co-founding the multi-award-winning hat-trick. Studio Sutherl&'s beautiful execution of the cover for CA 272 proves the power of a simple, smart idea that doesn’t need a big agency behind it.

You can watch the making of the stunning collectable cover – with glow-in-the-dark varnish applied by CA's print finishing partner Celloglas – above.

No doubt many of you would kill to land a job at one of the studios on this year’s list. But if you’re eying up a freelance career instead, our other main feature this month charts four possible routes into self-employment, and is packed with advice for getting the most from whichever one you choose.

CA issue 272 is packed with insight and inspiration as ever, including:

Buy Computer Arts issue 272 here. And to make sure you never miss an issue of Computer Arts, subscribe here today!