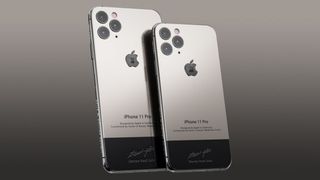 A luxury phone company has released a set of iPhone 11 Pros that come with a piece of Steve Job's famous black turtleneck sweater sealed in their casings. With prices starting at over $6K, these devices are not only expensive, they also fly in the face of the Apple co-founder's design principles – we don't think Jobs would be impressed.

Apple makes some of the best smartphones around, and new iPhone 11 looks set to continue that trend. However the design of the device is a key part of its popularity. That's because Jobs' was meticulous when it came to the look and feel of Apple products.

One of his mantras was to prioritise "focus and simplicity". Hence why so many Apple releases look so sleek and elegant. These iPhone 11 Pros throw that philosophy out of the window though, as they clutter the device with a swatch of Jobs' wardrobe and an engraving of his autograph.

With price tags south of $6k, you'll be paying steeply for this bastardised design
too – the standard 64GB model starts at $6,290, while the 512GB Max version goes for up to a whopping $7,460. In our opinion, you're better snapping up a bargain iPhone with the upcoming Apple Black Friday deals.

Created by Russian luxury phone company Caviar, the iPhone 11 Pro Superior Jobs models is "a tribute to the immortal genius". "The strict Apple design is embodied in the body of firm titanium: only clear lines and moderate color solution," it adds.

Nice try, but we're not buying it. We just feel that a better tribute to Jobs would be a limited edition model that exemplifies his design principles, rather than cluttering a device with signatures and fabric.

If you've got deep pockets and you're looking for a new phone though, you'll need to move fast. The iPhone 11 Pro Superior Jobs range is limited to just nine pieces worldwide.