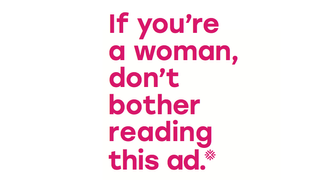 In our look at the best print ads ever, we've seen how being controversial can be effective, but this campaign by LOUD pushes the offensive angle to the limit. It's not a mindless shock tactic though. Ad Standards wants its campaign to be an advocate for positive social messaging by reminding the nation that offensive advertising is prohibited. It also asks for people to point out progressive ads.

The campaign, called *kinder conditions, started to appear across Australian radio, TV, newspapers and billboards earlier this week. And the ads (below) are unmissable thanks to the use of lines such as "If you're a woman, don't bother reading this ad" and "This ad is for white people only".

It's a volatile piece of copywriting from Ad Standards, the copy above refers to women as "sweetheart" and makes a comment about their "cushioned heels". In its effort to make a point, is Ad Standards sailing too close to the wind?

When you take a closer look at the advert though, you'll see that the provocative headlines lead into a more sincere message, which asks "are these the advertising conditions we want?" It also outlines that "there are codes that set high standards. Together, we can exceed them".

For the CEO of Ad Standards, Fiona Jolly, the *kinder conditions campaign was a way to remind people that advertising codes are in place to "achieve a greater good for everyone".

"Australians may not be aware that certain codes exist, which is why we have set about bringing them to the forefront – it's not because we get a lot of complaints about them," said Jolly in a press release. "If the public has concerns about these issues, they can raise them and Ad Standards will act on behalf of their concerns.

"The fact is, while the advertising Codes set high standards, we can encourage brands to exceed these to create positive change in the world," she adds. "The public should be aware of the standards in place and be encouraged to value socially progressive advertising."

Australia isn't the only place to address harmful practices in its advertising. Only recently the UK finally banned sexist adverts with laws that forbid "gender stereotypes that are likely to cause harm, or serious or widespread offence".

And as for using provocative words and imagery to get a message across, the *kinder campaign isn't alone. The racial double standards surrounding the Cleveland Indians logo was recently demonstrated with these deliberately offensive alternatives.

With such a concerted effort going into tackling harmful representation, we've got our fingers crossed that the world is heading in a more inclusive direction. And if you've seen a kinder ad that you want to nominate, head over to the Ad Standards site.