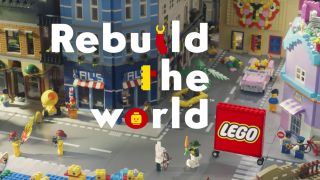 Leading toy brand Lego launched its first international ad campaign in three decades earlier this week. And with its clever video and boundary pushing print ads it looks set to be a creative force for good.

Created in partnership between the Lego Agency and BETC Paris, the new campaign sees Lego go back to basics in a series of TV, social, and out-of-home promotions.

As well as celebrating the enduring creative potential of the popular building bricks, the advertisements also challenge people to use their imagination with the tagline Rebuild the world.

At the heart of the Rebuild the world campaign is a new cinematic ad directed by the multi award-winning Traktor, which sees a chase between a hunter and a rabbit unfold with the whacky imaginative leaps that only a child playing with Lego could make. But there are also plenty of in-jokes and clever references for Lego's older demographic to appreciate, too.

Accompanying this film is a set of minimalistic and witty posters. In them, we see how Lego can transform the world for the better, whether its by fixing a broken heart or by turning car emissions into a bouquet of flowers.

"Rebuild the world is all about seeing where imagination takes us and celebrating the natural creativity of children," says Julia Goldin, chief marketing officer at the Lego Group.

"We want to encourage and help kids around the world to develop and retain these skills as they grow older. With this campaign, we want to inspire people of all ages to unleash their creativity to create a world of infinite possibilities through Lego play."

Given that Lego has increasingly relied on TV and film tie-in kits over recent years, this is a welcome advertising approach from the brand. Everyone's been drawn to the creative and open-ended appeal of Lego at one time or another, and it's great to finally see a campaign which celebrates that message without being too preachy.

"Rebuild the world is our most ambitious global brand campaign to date," adds Rémi Marcelli, senior Vice President and Head of the Lego Agency.

"The campaign is a new, modern expression of the true, deep foundations of the Lego brand. It is a playful interpretation of our mission to inspire and develop the builders of tomorrow."