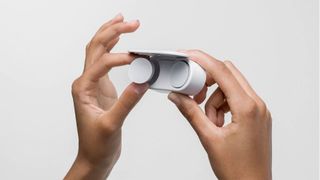 We can't have been the only ones who couldn't believe the amount of new tech revealed at yesterday's Microsoft Event. If you missed it, highlights include a new Surface Pro 7 and Surface Pro X, plus a very exciting dual-screen tablet – the Surface Neo – and then the Surface Duo, Microsoft's latest foldable phone. And of course, this is all great news for those looking for a Microsoft Black Friday deal, as hopefully it means the older stock will be discounted.

But let's go back to the new Surface Earbuds. We'll admit we had an initial 'what were they thinking?' moment when we saw them for the first time (see the introductory video below). Seriously, the design takes some getting used to. The Surface Earbuds looks like a cross between milk bottle tops, tiddlywinks and some huge clip-on earrings that have accidentally ended up inside your ear.

But then again, we were all confused by Apple's AirPods design when it came out, and no one really looks twice at people wearing them these days. So perhaps we'll all get used to the milk bottle top look.

01. They're gesture and voice enabled

The Surface Earbuds come in three sizes, and none of them are exactly discreet. However, that means they have a large enough surface area for the controls to really work. You can control the volume by sliding up and down, double-tap to play/pause music and if you want to skip a track, you can swipe forward (or back, to go backwards). You can also make phone calls, and pair the earbuds with just one click. So far, so intuitive.

If you've got an Android device, there's also Spotify integration so you can bring up Spotify with three taps. That's pretty cool, and also useful if you are used to having to open your phone to bring up your favourite Spotify playlist.

You can also activate voice assistant by pressing down on the earbuds, you'll either get Cortana or Google Assistant, depending on what you're connected to (and you should be able to link up to Siri, too, with the right app). There are two mics built-in to the headphones to aid this feature.

It all seems like you'll be able to control your headphones pretty well from just the buds, without having to get your phone or other device out all the time.

Microsoft is boasting that the Surface Earbuds have 24 hours of battery life. That's sort of true, but only if you remember your carry case. The earbuds actually have eight hours of battery life – enough for most long journeys. You then use the charging case, which looks like a rather deep glasses case, to charge the headphones two more times (hence the 24 hour battery life claim).

It all sounds relatively simple, and there are no bulky wires or plugs to carry around, which is a bonus.

03. They can create real-time captions

Okay, so we know that Office 365 isn't exactly the coolest thing around, but the Office 365 integration features that Microsoft highlighted at the event did sound pretty useful.

If you're presenting a Powerpoint, for example, what you are saying could be transcribed directly on to the bottom of the screen. This is potentially life-changing for those who rely on reading captions. As long as it works, that is. We'll assume it does for now and remain excited.

As well as captions, you can also dictate to your headphones, which will then translate that text into Office apps like Word or Outlook. This is great news for anyone who loves voice recordings, you'll be able to send your voice notes like Dale Cooper in Twin Peaks. Or Alan Partridge.

04. They can translate for you

As well as captions, the Earbuds can also translate into over 60 languages. That means that you could be talking through a Powerpoint and your earbuds will translate into text on your screen. Again, this a potentially huge game-changer for many, especially those working in organisations where several languages are spoken.

05. The sound seems pretty good, too

We may have left it till last, but the sound quality of a pair of headphones is of course vital to their success.

Microsoft says that the earbuds feature "custom-designed drivers that are precisely-tuned to deliver an exceptional acoustic experience." They also boast omnisonic sound, and those two in-built microphones should aid call quality and voice recognition.

Again, if it works like they say it will, it'll be great.

The Surface Earbuds will be available "later this year" at a cost of $249. Note that we haven't said we love the price, but if you think you could really benefit from the above features, and you don't mind having milk bottle tops in your ears, then the Surface Earbuds could be for you. You can sign up to be notified when they're available on the Microsoft website.

And if you know you're more of an AirPods person, see our best deals on those below.