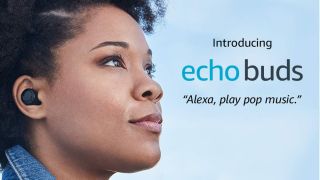 If you were to think of wireless headphones, chances are you'd picture Apple AirPods. But it looks like Amazon wants to stake its claim in that market as it has unveiled its own true wireless headphones: Echo Buds. The announcement came as part of Amazon's Fall 2019 Hardware event, along with news that it was also launching its own smart glasses.

From Amazon's point of view, breaking into the wireless headphone market makes total sense. Apple's AirPods are so popular that in 2018 alone it sold 35 million units. You might've even purchased some for less with the help of our Apple AirPods deals page.

Want to see how these compare to other headphones on the market? Check our our guides to the best running headphones, and the best noise-cancelling headphones.

And while AirPods will usually set you back $159, Amazon looks set to undercut Apple with an RRP of $129.99 for the Echo Buds. The pair are equally matched when it comes to battery life too, with both giving five hours of music playback per charge. Meanwhile the Echo Buds charging case can hold up to 20 hours of charge.

The Echo Buds will be officially released on 30 October, but you can preorder yours from Amazon now.