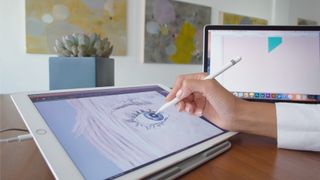 Launched back in late 2014, Duet Display is an app that turns iPads, iPhones and desktops into extra display devices. Designed by ex-Apple engineers, Duet Display is regarded amongst the best iPad apps and has gone on to become the number one biggest selling iPad app in over 20 countries. This comes as no surprise when you consider that the team behind Duet Display are constantly working hard to improve the app, including the recent Duet Pro update.

The Duet Pro update is available through an in-app subscription costing just $20 a year, and enables creative professionals to access a raft of new Duet features. These updates include iPad Pro support, with the Duet Display team hoping to turn the device into a viable replacement of the Wacom tablet.

Other features include support for pressure and tilt sensitivity with the Apple Pencil for both Mac and PC (making Duet Pro the only app to offer support for both), as well as new algorithms designed for drawing that achieve both ultra responsive Apple Pencil input and high quality image refresh.

Duet Pro also offers a new image quality option which refreshes the image to Pixel Perfect quality. On top of this, the app allows for two finger gestures for Zoom and Pan, and a stylus hover feature which can be triggered by pressing a hotkey on the keyboard.

Chief Design Officer at Duet Display, Mason Hastie, explains the motivation behind these updates. "We believe these features will turn your iPad Pro into the best quality, graphics tablet for Mac and PC. We think we can greatly simplify the current creative experience and allow people to use a much more powerful device in their daily workflow, the iPad Pro."