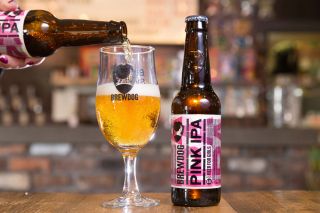 Oh boy. If the road to hell is paved with good intentions, then BrewDog has probably just built an eight-lane superhighway with its latest piece of marketing. With International Women's Day just around the corner, the cult Glasgow brewery has waded in with a well-meaning campaign aimed at ending gender pay inequality, which manages to hit all the wrong notes.

It's hard to fault much of its thinking. "At BrewDog," says its press release, "we have always believed that beer is for everyone, and equality is a fundamental right. So today we are launching a clarion call to end the discrimination of gender pay inequality. In the UK men earn on average 20% more than women. And that's not ok."

Yep, with you there. But here's how BrewDog's approaching the issue: with a specially redesigned version of its Punk IPA, renamed Pink IPA. "Satirically dubbed Beer for Girls," the company says, "Pink IPA is BrewDog’s clarion call to close the gender pay gap in the UK and around the world and to expose sexist marketing to women, particularly within the beer industry."

We’ve created a beer for girls. And it’s pink. Because women only like pink and glitter, right?🤦‍♀️ #Sarcasm Lets show that enough is enough with stereotypes. pic.twitter.com/g1zonXFInmMarch 6, 2018

And yeah, you can see what BrewDog's doing, and honestly there are some great points in there. You can almost sense it tiptoeing through the equality minefield, with a promise to pay 20 per cent of the proceeds from Punk IPA and Pink IPA sold over the next four weeks to charities that fight inequality and support women. Plus a 20 per cent discount on Pink IPA in BrewDog bars for people who identify as female – a qualification guaranteed to enrage all the right people.

Meanwhile over at the Pink IPA site, it provides a handy clickable guide to the gender pay gap around the world, with South Korea coming off worst with a gap of 39 per cent.

Yet for everything it gets right, it then makes a colossal, cringeworthy misstep, starting with the whole misguided Pink IPA and Beer for Girls thing, and then followed up by its red-faced insistence that it's satirising sexism with this approach. Which we're sure is its intent, but the widespread reaction on social media shows us just how infuriatingly wrong BrewDog's got this one.

Ah, I see BrewDog is now that lad from your A-level politics class who makes "get back in the kitchen" jokes but it's OK because he's being "ironic" and is actually a "feminist" pic.twitter.com/F9xiK7xRJxMarch 6, 2018

We take you now live to Brewdog's marketing department pic.twitter.com/UJ13aNGiV9March 6, 2018

For all brands, it's REALLY important to have consistent and clear messaging, ESPECIALLY when talking about real issues and nuanced subjects.Brewdog I think, have the right intentions deep down, but god the messaging is an absolute car crash. Must do better. pic.twitter.com/j6s1k46Yx1March 6, 2018

We kind of feel a bit sorry for BrewDog; it's raising some important points and trying to do the right thing. But this whole episode reads like your dad hearing about this 'feminism' thing and giving it a try. For example, from the Pink IPA site:

"Pink IPA might look different on the outside, but it’s exactly the same on the inside.