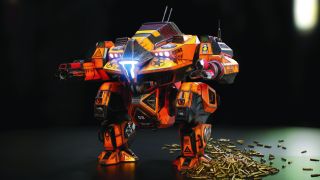 With the new year upon us, we can’t think of a better way to refresh your workflow with our brilliant masterclasses and workshops at Vertex, our event to bring the CG community together!

We have a broad range of sessions to attract any artist and they’ve been carefully curated. From games and VFX through to VR, we’ve covered all the bases including character concepting, real-time creation and more.

You’ll be able to take away skills to upgrade your skills immediately with leading industry pros and learn from the world’s best creative studios no matter which area you specialise in.

VR genius Glen Southern will be showing the process of concepting a character, using tools such as Oculus Medium in his ‘Creation for VR, in VR’ workshop.

This will cover initial setup, learning the UI and setting good practice rules for working in this space, then will look at sculpting in 3D, using stamps and navigating with your body and hands, as well as texturing and output for other formats, including 3D printing.

Adam Dewhirst - How to build a human in one day

Modelling supervisor Adam Dewhirst from The Mill New York will teach you how you can create a digidouble in less than 24 hours in his workshop ‘How to build a human in one day’.

Using a range of techniques from photogrammetry and mesh wrapping to The Mill’s custom human rig, Dewhirst will delve into The Mill’s ‘master human set up’, and highlight how they’re investigating the future challenges of CG human models.

Saddington Baynes CEO Chris Christodoulou and senior digital artist Marc Shepard will present everything you need to know about the mass customisation of visual imagery and discuss how technology can help creativity to flourish.

The duo will demonstrate the technical backbone and processes that sit behind mass customisation, alongside the tools and software that can help artists work faster (with emphasis on Maya and Nuke).

From Creative Assembly is character artist Danny Sweeney who will reveal some of the workflows and challenges of working on the game Total War: WARHAMMER 1 & 2.

Sweeney will talk about the character development pipeline and techniques at Creative Assembly, as well at how some of the High Elf, Dark Elf, and Skaven units were developed, re-purposing existing assets, detailing your high-poly sculpts, creating hair and fur within technical limitations, creating ragged cloth, getting the most out of your UVs and more.

Badruddin will take you through a shot from beginning to end showing you the thought process behind animating a character shot in a short amount of time without sacrificing quality.

Forget everything you were told about how to animate and get ready for a fresh new way to approach your work.

CG generalist Mike Griggs will bring his 20 years of CG experience to Vertex in his 3D fundamentals workshop.

Following his popular Bootcamp, Fundamentals and Basics sections in 3D World, Griggs will guide you through the process of laying down the foundations of becoming an efficient and effective artist.

Don’t miss out, book your ticket now at vertexconf.com. There are still some amazing workshops we’ve yet to announce so keep an eye on our website, where you can also find out more about the other amazing speakers, workshops, recruitment fair, networking event, expo and more.