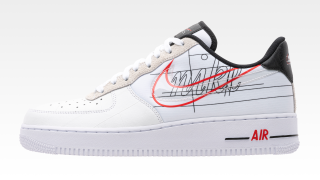 The Nike Swoosh is one of the world's most recognisable logos. To celebrate the legacy of this iconic piece of branding, Nike recently released a trio of new footwear ranges that feature different versions of the tick-shaped design. It's also worked with nine animators to pay homage to the Swoosh.

The shoes have been released alongside Foot Locker Inc as part of a collection called The Evolution of the Swoosh. In our guide to logo design we looked at how the Swoosh's simplicity is the secret to its enduring success, so it makes sense to revisit classic iterations for this range.

And when you consider that the designer of the Swoosh, graphic design student Carolyn Davidson, was only paid $35 for her logo idea back in 1971, it looks like Nike has made a significant return on her work.

As for the shoes in the new range, they include the Script Swoosh, Sunburst, and Swoosh Chain 'packs'. As its name suggest, the script pack features Davidson's hand-drawn Swoosh. Meanwhile the Sunburst shoes sport a circular variation of the Swoosh that appeared on apparel. Finally, the Swoosh Chain sneakers are decked out with little interlinking Swooshes. Take a look at them in the gallery below.

Nine animators at the Portland-based agency One Hundred were also called upon to promote the impact of the Swoosh in their own distinctive art styles. These include cult animators such as Mason London (aka Joe Pyrtherch), as well as Tiago Majuelos, Julian Glander, and Drew Tyndell.

Take a look at how they interpreted the Swoosh in the looping animations below. It's worth noting that these clips interpret popular trainers such as the Air Max 97, the React Element 55, and the Nike Air Force 1, all of which are part of the Evolution of the Swoosh collection.

Good times making this animation for @Nike to celebrate the drop of the Nike React Element 55 sneaker and the 1971 pinwheel logo, with a fun track by @tony_quattro. I was in good company with 8 amazing animators tagged below—check out their takes on the rest of the collection. Thanks to @_one_hundred and @footlocker for having me. - - @grand_chamaco @rhymezlikedimez @masonlondon @tiagomajuelos @recsoverto @numecaniq @glanderco @ruffmercy Drew Tyndell

The Swoosh isn't the only successful piece of Nike branding, either. Earlier this year its tagline, 'just do it', was voted the most memorable brand slogan. So clearly Nike knows how to make a lasting impression with customers.