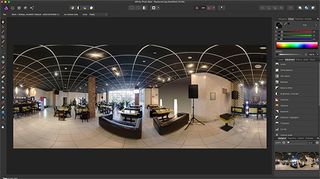 2016 continues to be an amazing year for Affinity users. With Affinity Designer getting a powerful new upgrade, as well as the overall Affinity software finally becoming available on Windows, it appears that Affinity Photo is the latest feature to welcome some improvements.

Tipped for a release in the Mac App Store in early autumn, alongside a Windows version in free public beta around the same time, Affinity Photo v1.5 builds on its position as Apple's 'App of the Year 2015' with some powerful new features.

These upgrades include an advanced HDR merge that can produce full 32-bit linear colour space images, a new workspace for tone mapping, and focus stacking that will allow users to bring depth to multiple combined images.

Affinity Photo v1.5 also boasts batch processing, which creates a smoother, faster workflow. This is all capped off with macros to record and replay a set of commands, plus new ways to edit 360 degree images.

“This will be the fifth major update we’ve pushed out since the launch of Affinity Photo – all free of charge to people who’ve bought the app," says Ashley Hewson, Managing Director at the developer team, Serif.

“The success of Affinity Photo and the outstanding reviews we’ve had are proof that it delivers what creative professionals need – thrilling speed, sophisticated tools, pinpoint accuracy and painless compatibility, coupled with an attractive, modern look," Hewson adds.