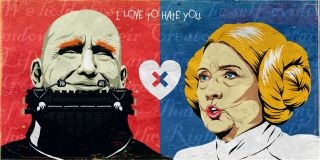 The 2016 presidential race has been a campaign like no other and it hasn't always been a clean fight. To inject some light relief into the competition, art director Butcher Billy has got involved with his trademark blend of celebrities and pop culture icons.

We've already seen how Sagmeister & Walsh have created badges that urge millennials to vote, but Butcher Billy has taken a bit more of a balanced approach with his distinctive illustrations. Although depicting Donald Trump as Darth Vader must surely hint at what he thinks of the Republican candidate.

Titled Trump X Hillary: I Love to Hate You, this series sees the presidential hopefuls reimagined as Alice in Wonderland characters, Kiss members, and even the underwater inhabitants from Spongebob Squarepants. But with lots of voters still sceptical about each politician, maybe the illustration that paints them out as Batman villains will prove to be the most popular.

Explore the whole series below, and don't forget to head over to Butcher Billy's Behance page to browse more of his work. And if you like what you see, don't forget you can grab these images as prints, phone covers, t shirts and more on his site.