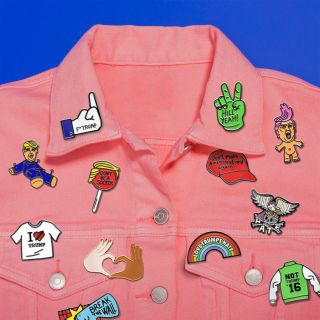 In case you hadn't noticed, there's a presidential election coming up in the USA quite soon, and it's turning out to be one of the most contentious and divisive campaigns yet.

Never ones to shy away from sticky subjects, Sagmeister & Walsh have waded into the election with a new project: "Pins Won't Save the World". They've created a set of 40 illustrated badges with the aims of protesting against Donald Trump, encouraging people to vote for Hillary Clinton, and promoting love, tolerance and kindness.

Why badges? It's basically because enamel badges and patches are a hot trend right now, especially amongst those headline-grabbing millennials. And while millennials are largely very liberal, only 26 per cent of them voted in the 2012 election – amounting to around 48 million missed votes – and they're not actually that keen on Hillary Clinton.

Which, if you had your heart set on Bernie Sanders for president, probably seems a reasonable position to take. But with the polls narrowing and President Trump seeming like a possibility, Sagmeister & Walsh are out to try and motivate the millennials to register and vote for Hillary Clinton.

The eye-catching collection of badges – with some also available as patches, tees, posters and stickers, not to mention bumper stickers, and some awesome tattoos – features Sagmeister and Walsh's own designs, alongside contributions from a variety of their friends and colleagues including Brian Rae, Jean Jullien, Timothy Goodman, Olimpia Zagnoli, Ward Sutton, Will Bryant, Coucou Suzette, Adam JK, Ro & Co Studio, Jon Contino, and HORT.

They're available now from S&W's new ecommerce website; get your orders in at the Pins Won't Save the World store, safe in the knowledge that they won't cost you a fortune. "We want everyone to be able to wear their heart (and politics) on their sleeves (or bags and jackets)," say S&W, "so merchandise will be priced low." All profits will be donated to Amnesty International's "The America I Believe In" campaign.

There's also an amazing-looking Instagram account showcasing the various badge design, that's well worth a follow. And while S&W are well aware that their pins won't change the world, they argue that wearing them will at least make them feel a little better.

"And we think convincing our like-minded liberal friends (especially in swing states) to remember to register and vote for Hillary could make a world of difference," they add.