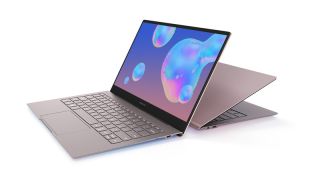 Samsung's Galaxy Book S is a super-light 13-inch touchscreen laptop that promises to offer the benefits of a smartphone – including a headline-grabbing 23 hours of battery life. It will go on sale in September with prices starting at $999.

The device was announced at Samsung's Unpacked event, along with news of the new Samsung Galaxy Note 10. So what's new about this laptop, and will it be good enough to rank amongst the best laptops for graphic design? Let's take a look...

Let's start with what everyone is getting excited about: the promised 23-hour battery life. TWENTY-THREE HOURS. Imagine. You could do out for the day and not even bother to bring a charger.

If these claims are true (the actual promise was "up to 23 hours of continuous video playback", so with heavier use that figure is going to drop), it's a big selling point. The laptop also charges via a standard USB-C cable, which is handy if you do run out of juice.

What are you sacrificing for this super-impressive battery life? Well, the Galaxy Book S is the first laptop to come powered by a Snapdragon 8cx, Qualcomm's 7-nanometer chip created for PCs, which has implications for performance. While the laptop will be capable of lasting, it'll have much less horsepower.

The essence of a smartphone, in a laptop

"It looks like a laptop, but it has the essence of a smartphone," said Samsung’s Hassan Anjum at the event. And there are plenty of smartphone-like benefits here. As well as that battery life and USB-C charging, the Galaxy Book S comes with LTE connectivity (it's always connected to the internet, via a data plan) and Nano SIM support.

You can use Microsoft's Your phone app to pair up the device with your phone, and sync photos, apps, and notifications. The anodised aluminium frame is also ultra-slim and light, weighing in at under 1kg, so it'll be perfect for toting around.

In essence, it's probably not the best pick for your main computer. However, for practical, on-the-go productivity, it's got a lot going for it.

Other features include 10-point multitouch, and a fingerprint sensor for unlocking and logging in. It'll run on Windows 10, and come in two colours: Earthy Gold and Mercury Gray. For more details check out our sister site TechRadar's hands-on review.