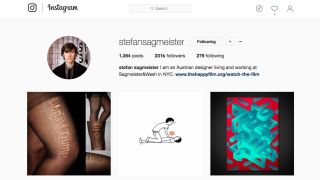 There's more to Instagram than beautiful snaps of avocado brunches. In fact, artists and designers have long been using the photo-sharing application to find an audience for their work. Now one of the biggest names on graphic design, Stefan Sagmeister, is getting involved by using his Instagram account as a design clinic.

That's right, one half of the legendary and occasionally naked New York-based design firm Sagmeister & Walsh, Stefan Sagmeister is inviting designers to send him their work with a view to it being shared with his hundreds of thousands of Instagram followers.

If your work is deemed worthy, it will be posted on his account with a short review written by the man himself. Once live, his legion of followers will be able to weigh in with their opinions, too.

Speaking to Dezeen, Sagmeister revealed that the idea came about a while ago, but that he's only been able to put it into action during his year-long sabbatical.

"Designers send in work they want to have reviewed," he told the site. "I select from the many that come in, either because they are very good and can be an example for others, or because I think they could be improved with some simple reconsiderations."

Unlike a lot of internet feedback, the vast majority of feedback on the work that Sagmeister shares is refreshingly positive.

"I have found that the Instagram community was very helpful," Sagmeister added. "Most commenters genuinely want to improve the work, it has been very constructive. There's been very little snark."

Followers of Sagmeister's Instagram account can expect work from designers to be shared several times a week. The designer aims to continue the clinic for the remainder of his sabbatical, so if you want to get your work appraised by one of the biggest names in the business, you've got six months left to get involved. Are you feeling brave enough?