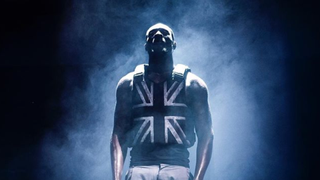 Grime artist Stormzy has confirmed that Banksy designed the Union Jack stab vest he wore during his headline set at last weekend's Glastonbury Festival. In an emotional and celebratory Instagram post, Stormzy revealed that the stab-proof custom vest was "made by the greatest, most iconic living artist on planet earth, the one and only BANKSY."

Elusive street art legend Banksy had already shared a photograph of Stormzy wearing the black and white Union Jack stab vest he designed on his Instagram page. As we can see, the flag is depicted with the watery paint present in lots of Banksy's work.

His caption for the picture read: "I made a customised stab-proof vest and thought - who could possibly wear this? Stormzy at Glastonbury."

. I made a customised stab-proof vest and thought - who could possibly wear this? Stormzy at Glastonbury. Banksy

Considering that Stormzy paid tribute to Damilola Taylor by covering Kanye West's Ultralight Beam, the design of the vest can be read as a statement on Britain's knife crime and racial inequality in its justice system.

The pairing of the artist and the rapper makes for a powerful combination because both Banksy and Stormzy are known for making political statements.

One of Banksy's most recently spotted works in Paris takes aim at France's tough anti-migrant policy. Meanwhile Stormzy also used his time on the Pyramid stage to highlight how ballet shoes have only recently been made in skin tones other than white.

In an Instagram post shared after the event, Stormzy took the time to thank everyone involved with his performance.

Last night I headlined Glastonbury in a stab-proof vest custom made by the greatest, most iconic living artist on planet earth, the one and only BANKSY. I opened my set with words of encouragement from my hero and ultimate inspiration and the greatest rapper to ever grace planet Earth Jay-Z. I got to sing with the most incredible and legendary man I know - Chris Martin - a man who’s genius I am so in awe of that it makes me go to studio and try to emulate him. Raleigh Ritchie - one of our country’s greatest musical talents thank you my brother. Dave & Fredo - I love you my brothers, UK’s finest rappers, thank you from my heart for helping me light up the stage and making one of the most beautiful moments our culture has seen. Thank you to my lil brother @djtiiny theres no way in hell I could do this without you you have my back always and I’m so proud of you - you are my brother in arms we go to war together I appreciate you. To Bronski, Amber, Misty, Trev, Kojo, Tim, James, Sam & my whole tour/creative/production team I appreciate you all and I’m forever grateful. To my band and to my amazing choir who have worked tireless and given this their everything all whilst sounding flawless, effortless and amazing I appreciate you all very much I can’t do this without you. Massive thank yous to: the W.A.R dance crew you lot are now my brothers thank you for bringing a God-sent energy that I truly needed. To Princess K - you are a superstar, the crowd went absolutely crazy for you and I’m so excited to watch you take the world by storm. To Ballet Black, the grace, beauty and feeling you blessed the world with yesterday was felt in the hearts of millions. To Mac, Trizzy, Bobby, C1, Flipz my BikeStormz family I’m so happy the world got to see you lots talent and skills - you just showed the world about bikelife - be very fucking proud. To Big TJ & James for getting me ready and prepared for the energy this set would need. To the whole of my #MERKY team - my family who hold me down and have my back till the end. THANK YOU GUYS, THANK YOU GOD. I am proud of myself and I feel blessed and fulfilled and purposeful. Your Glastonbury 2019 headliner, over and out. 🎤❤️ stormzy

Stormzy, which is the stage name of Michael Omari Owuo Jr, was the second youngest solo act to headline the festival, with the youngest being a 24-year-old David Bowie in 1971. Another politically charged moment during his set was when he performed his track Vossi Bop, which includes the lyrics "Fuck the government and fuck Boris".