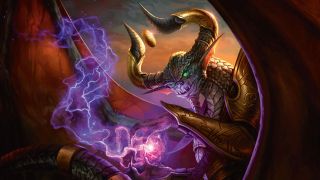 For the first time since 2015, Wizards of the Coast has released an annual Core Set of cards for Magic: The Gathering. The 2019 set is available now and it’s bedding in with players as they get to grips with some very in-your-face creatures and spells. It also contains some exciting imagery and a selection of work from new artists to keep the fantasy card game’s main themes as fresh as ever.

Over the past few years, M:TG sets such as Amonkhet, Ixalan and Dominaria have focused on settings and narratives based around historical and mythological themes. There have been pirate and dinosaur invasions, Egyptian-style gods and vampiric hints of horror. Core Set 2019 gets back to basics in many respects.

We caught up with some of the illustrators to find out more about the art techniques and thought processes that went into making the new set.

“We went into M19 with a goal of evoking classic fantasy that a variety of people know and love, regardless of whether they’re long-time players, or are just picking up their first Magic cards,” says senior art director Cynthia Sheppard.

In addition to the planeswalker Nicol Bolas – as seen in the game’s hero art by Magali Villeneuve – four elder dragons come to the table including the impressive Chromium, The Mutable as illustrated by Chase Stone, and an array of lesser ones like Lathliss, Dragon Queen by Alex Konstad.

However, you never know where the best artwork is going to turn up in a new set. Something as simple as Rustwing Falcon, a white card costing one mana, has an eye-catching silhouette as it’s dropped by a player on their first turn. The artwork was painted by British artist Paul Scott Canavan who’s new to the extensive Magic universe.

“Getting Magic briefs is my favourite part of the job,” says Canavan, “because they’re always descriptive but flavourful, with lots of scope to tackle them in your own way. The brief for Rustwing Falcon was all about the light and colour, selling the idea of a beautiful bird soaring about the grasslands, flecks of rich gold in its feathers.”

Planeswalker cards are a major focus for players because they’re so powerful. Core Set 2019 sees the return of old favourites, including Ajani, leader of the cat warriors, and Liliana the necromancer. The latter was painted by another new magic artist, Livia Prima, who as well as creating the necromancer and a gorgon for the black series, also painted Angel of the Dawn for the white section of the release.

“Angels, necromancers and gorgons complement each other in a fantasy world. It’s such a pleasure to paint different moods and characters one after the other,” says Prima.

One new planeswalker was introduced to the set in the form of Vivien Reid, who is aligned with the game’s green manna and who can summon creatures and direct them to attack using a magic bow. The card was painted by Austrian artist Anna Steinbauer.

Visually, the Core Set has a darker and more ominous feel to it than the previous release, Dominaria, which had a light and dreamlike tone. Core Set 2019 takes players back to the planes first introduced in the 1990s. In play, creatures’ powers can be built up quickly and although many intricate control strategies can be developed, it perhaps facilitates a more aggressive gameplay style.

For the artists, however, each brief contains four main goals. “Firstly, it needs to say something about what the card does. Does the creature fly? Does the spell draw other cards? Our creative team is responsible for distilling down the card rules and mechanics to visuals that we then give to the artists to bring to life,” says Sheppard.

Cards also need to connect with the overarching themes of the set. As Sheppard explains, “That’s what helps a goblin or a burn spell, for example, look different from set to set.

“Thirdly, it needs to be illustrated with care and good craftsmanship. Much of that is on the artist and their abilities, but we will sometimes push.”

“Finally, it needs to look different from other cards on the table. Art is remarkably important for quickly identifying what cards are being played by opponents during a game.”

Naturally, Core Set 2019 contains the work of some of Magic’s legendary artists, including Chris Rahn, Magali Villeneuve and Svetlin Velinov. But with each new magic release the art directors at Wizards of the Coast bring in new blood. While some of the more experienced painters are able to develop a knack for painting iconic card artwork, sometimes it’s work by new names that players gravitate to.

When Dominaria came out in 2018, it saw the debut of Tyler Walpole. One of his commissions was a Knight Token, a sort of fodder card that’s usually summoned by a more powerful creature or spell. However, with a unique stained glass style to it, his knight became a card of choice for just about everyone playing a white deck. For artists, making a card desirable among players is a trick of the trade.

“The biggest piece of advice I give new artists is ‘be yourself’,” says Sheppard. “Sometimes there’s an unspoken pressure on artists to try and make their work look different, or like a generic average of everyone else in the game – and that goes for all clients, not just Magic. But the truth is that if we want to work with you, we think you have something special to bring to the game, beyond just an ability to paint.”

This article was originally published in ImagineFX, the world's best-selling magazine for digital artists. Buy issue 166 or subscribe.