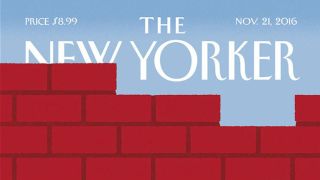 This year's presidential race was one of the most combative competitions in the history of American politics, with both sides dealing with scandals and dishing out controversial soundbites. In reaction to the result, American magazine The New Yorker has commissioned a cover with an experimental design that comments on one of Trump's presidential promises.

Created by prominent children's book illustrator, Bob Staake, The Wall is a bold cover, which depicts layers of red bricks gradually obliterating the magazine's title. The design reflects The New Yorker's stance against the president-elect. "When we first received the results of the election, we felt as though we had hit a brick wall, full force," says the magazine's art editor, Françoise Mouly.

But no matter your opinion on the outcome of the election, there's no denying that this provocative illustration pushes boundaries in terms of what's possible when it comes to cover design. The Wall cover issue is available to buy from November 21.