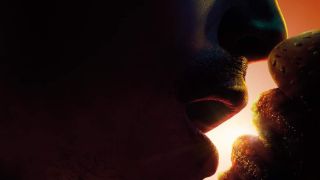 However you might feel about McDonald's, there's no denying its marketing team has some creative flair. At first glance, these new images released last week for McDonald's Thailand could easily be part of yet another seductive aftershave campaign. Soft, low lighting. Two pairs of lips about to kiss. But look a little closer, and they immediately go from from hot to horrifying. Yes, one of their noses is sprinkled with sesame seeds. Yes, their lips are made of beef, Yes, they are a burger. Yes, we wish we could unsee this optical illusion too.

The ads, created by TBWA Thailand, were posted to McDonald's Thailand's social media channels to mark Valentines Day last week (which at least means there is some logic to the meat-snog). The words 'i'm lovin' it' are thrown in for good measure – though the ads take the slogan a little too literally for us. Don't expect to see these on our list of the best print ads ever any time soon.

While most of the comments on reddit fall into the NSFW category, it's fair to say that users over there have beef with the ads too – although a few suggest that the burger is simply in need of some lip balm.

Still, these ads got us talking, and they're by no means the only audacious design McDonalds has run with over the last few years. From last month's striking type-only ads to a series of defaced classic paintings, the burger peddlers aren't afraid to take risks in order to bring home the bacon. And hey, at least the smut is deliberate this time – who can forget last year's cup-based epic McFail?