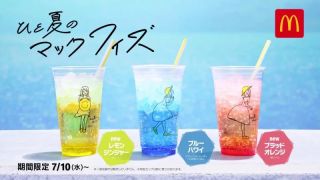 McDonald's Japan has released a set of cups to promote its new range of soft drinks, McFizz. The cups are supposed to elicit a theme of summertime romance, showing naive line illustrations of a boy and girl on opposite sides of the cup, who share an innocent moment when the empty cup is lined up in a certain way.

However, fast food fans have discovered that when you turn the cups a different way, you are faced with a range of decidedly less innocent scenes. We're not sure if this was an intentional design quirk, created in an attempt to stir up publicity and enter inspirational lists of packaging design, or whether it's a case of something looking amazing on screen, but not being user-tested quite thoroughly enough. (See our best travel mugs if you want a reusable coffee cup with a less suggestive image.)

Here's what McDonald's was hoping customers would see in the cup (or see video above).

And here's what people actually saw...

The wink on the right-hand image really makes it. And don't worry, this isn't a one-sided love affair, either.

With another subtle manipulation, the illustrations take on some interesting proportions, where either the boy or girl becomes huge next to their partner. Surely McDonald's didn't really want to promote a huge age gap, or worse, paedophilia?

Despite several people pointing out these not-so-innocent variations on the McFizz love story, McDonald's has refused to pull the cups, which are apparently now in serious demand.

The fast food chain is known for its strong ads and design. Most recently, there were minimalist posters in France, which used fries to guide motorists, and even a mini-McDonald's for bees in Sweden. Has McDonald's in Japan been neglected? Or is someone somewhere having a good ol' giggle at what they've unleashed into the world?