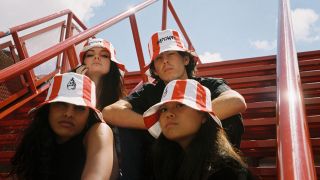 The bonkers project, for KFC Russia, is the result of a collaboration between W+K Amsterdam and Russian streetwear label Mam Cupy. It shows both KFC and Mam Cupy logos flipped upside down while in hat form – though they're the right way up when the item's used as a bucket (read more about making a statement with your logo in our guide to logo design).

KFC has form when it comes to pulling off unexpected marketing campaigns – its FCK apology ad by Mother London picked up a D&AD Yellow Pencil – but is this new campaign genius or madness?

The bucket-hat is part of a wider branding campaign for KFC Russia by W+K and is accompanied by this glorious video:

'Is it a hat? Or a bucket? But if it's a hat, how can it be a bucket? I don't know, but I like it,' says the video, while sultry models pose with the hat. It's worth noting that none of these models look like they have fried chicken grease running down their faces, so we can assume that they are sticking to the hat function.

“For years we looked at a KFC bucket and wondered whether it would make a good hat… now we know," said W+K Amsterdam copywriter Dasha Ovechkina and creative director Cal Al-Jorani in a statement.

We're not entirely sure that the world needed to find out to be honest, but this is an imaginative, if somewhat ridiculous piece of branding from W+K Amsterdam. The pros of the bucket-hat? Well you certainly wouldn't lose it in a crowd. And if you did happen to get hungry while in said crowd, and had some food to put in your hat, you'd be laughing. Though if you wanted to put your hat on again, you'd probably discover the downside of this particular tie-in.

Even after watching the video, we still have a few questions. First of all, was this just one of those throwaway ideas someone suggested in a meeting that went a little too far? Was it born out of someone saying the phrase 'I'll eat my hat'? And perhaps most importantly, will KFC Russia be serving directly into the hat-bucket?

Answers on a hat-shaped postcard please.

You can buy the KFC bucket-hat from Mam Cupy for 18,00 ruples (approx $28/£23)  here, although navigating the website may prove tricky if you don't speak Russian.