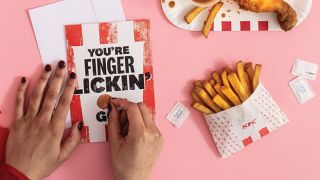 When you think romance, you think fried chicken, right? KFC is hoping so, as it's teamed up with Moonpig to produce a range of Valentine's Day cards, including a scratch-and-sniff limited edition card. It says, 'You're Finger Lickin' Good' on it, and when you scratch the chicken nugget, you get a waft of fried chicken. Saucy.

There are eight designs available, all featuring some rather suggestive chicken-based phrases. There's 'Fancy a Peck?', where you can super-impose your loved one's face for extra effect, there's 'Life with you is all gravy', 'You're a snack, wanna cluck?' and there's even a nod to the vegans, with 'will you be my vegantine this year?' It's almost like some of KFC's best print ads have been transformed into card form. Almost. (If you need a present to offset your chicken-y card, see our Valentine's Day gifts.)

To be honest, you could do worse on Valentine's Day. These cards are at least bound to get a laugh. The Moonpig page is also delightfully full of chicken innuendo (apparently that is now a thing). For example, it says: "Whether your partner is all about the breasts or prefers a mouth-watering set of hot wings, we know there's nothing more romantic on Valentine's Day than spending time together with a bucket of chicken."

So if fried chicken gets you or your partner in the mood, then these may just be the cards for you. The smelly card costs £3.49 and the other ones are £3.29 each. You can even buy a pack of four, just in case you have four chicken-loving lovers to impress. Plus, you get to be smug that 10 per cent of the proceeds will be donated to the KFC Foundation, which helps young people.

KFC is known for its fun and inventive branding. There was that bucket-hat, and that glorious apology on its chicken bucket. The brand also got in trouble earlier in the year for its use of the word 'cluck', which some complained was being substituted for a swear word. We can only imagine the phrases the team thought up that didn't make it on to the cards.