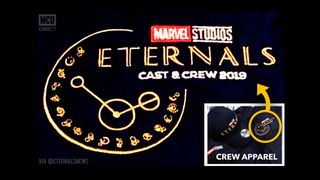 Eternals is set to be released this year as part of Marvel Cinematic Universe's Phase Four, and has just finished production. And although the official logo was released when the film was announced at Comic-Con last year, another logo used on the crew's clothing has now been leaked.

It's not uncommon for Marvel to tweak the official logo before release. This new logo (see our logo design tips to create your own version) uses the same lettering, but with added symbols on the left-hand side. These appear to be related to the Celestials, the ancient beings responsible for the creation of the Eternals. And as the film's plot will reportedly take place over thousands of years, it makes sense that time is an important theme, and therefore represented in the logo.

Here's an official new logo variation for #TheEternals that members of the film's crew wore during production! pic.twitter.com/4mLRXAuCB1February 8, 2020

The tweet has come from MCU Direct, MCU's fan account, so it's not official. But if the crew actually have this symbol on their clothing then that does suggest this might be the real logo. It doesn't exactly look like the slickest piece of branding we've ever seen, but it's probably a bit too early to judge.

Watch this space to find out more. Hopefully this won't be another leaked logo disaster like the Dune fiasco. We haven't seen any parody Eternals logos made out of pasta yet, but please do tag us on Twitter if you end up making one (and see our best logos post for some inspiration).