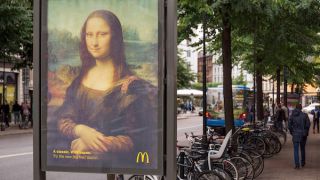 Today we find ourselves in the unique position of wondering how iconic artist Vincent van Gogh would have felt about one of his most famous paintings being used to promote a fast food restaurant. Yes, you read that right. A number of famous paintings have been used in a new series of posters designed to promote the latest addition to the McDonald's menu, the Big Mac Bacon.

Sticking out as one of the most bizarre examples of poster design we've ever seen, this series was made for McDonald's Sweden by advertising agency NORD DDB Stockholm, PR agency Prime, and media agency OMD.

In the posters, some of the world's most famous paintings are subtly draped in rashers of bacon, complete with the caption 'A classic. With bacon. Try the new Big Mac Bacon.' The idea here being that the Big Mac is a classic in itself, and it now comes with bacon.

The artistic masterpieces in question include Leonardo da Vinci’s Mona Lisa, Vincent van Gogh’s self-portrait from 1889, and Grant Woods’ American Gothic. Check them out in the gallery below.

Regardless of how we feel about McDonald's as a company, there's no denying it's come up with some pretty slick projects in the past, including turning billboards into bee hotels. But we draw the line at using unrelated works of art to simply hawk burgers. Although maybe we're being uptight? Maybe, there's a counter argument to be made that this is a way of bringing (almost) fine art to the masses?

Nope, we can't see it. Besides the concept, which in itself is enough to give us indigestion, we can't help but wonder what eye-watering sums of money MacDonald's had to stump up for the rights to use these images. Also, when it comes to the van Gogh portrait, the idea is so lazily executed. The rasher looks like it's just been dumped on his shoulder. Although, in order to ensure transparency, we have to admit to cracking a small smirk at the rasher skewered on the pitchfork in American Gothic.

According to a letter sent by his brother, Vincent van Gogh's haunting last words were "the sadness will last forever", which suggest maybe one of his many talents also include predicting future use of his artwork.