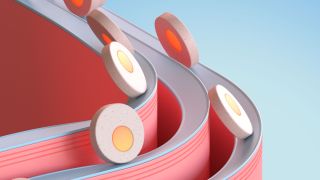 Ever wondered how a McDonald's Egg McMuffin is made? To help answer this burning question, and promote its popular breakfast sandwich, McDonald's worked with its advertising partner TBWA\Paris and 3D animator Matthieu Braccini to produce a series of 15 oddly satisfying animated GIFs. And it's one of the most addictive pieces of 3D art we've seen.

In the GIFs, which have now been compiled into a supercut (below), we see how the core ingredients of an Egg McMuffin are prepared in a surreal production line. Watch as dozens of muffins roll themselves into toasters, an infinite block of bacon gets peeled, and endless cheese slices get fanned into place.

While this isn't an accurate look at how Egg McMuffins are made (we assume), the supercut's vibrant colours and whacky assembly line make for a bizarrely hypnotic viewing experience. It's also won over the judges at Cannes Lions, who awarded it a Bronze Lion.

This isn't the first time McDonald's has transformed its food in bizarre ways as part of a promotion. Earlier this year, French fries became a wayfinding tool in a series of beautifully minimalist posters.

To take a look at how Braccini created his GIFs, head on over to his Behance page for a more detailed breakdown. You'll also find GIFs from the supercut that loop endlessly, which are sure to make you peckish.