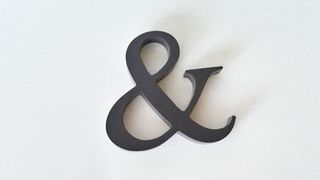 The English language is a treasure trove of eccentricity. It constantly delivers golden nuggets of trivia that are delightfully fascinating, and today's instalment is related to the ampersand. For those not familiar with the technical lingo, it's this '&' symbol, commonly used as shorthand for 'and'.

We actually covered this typography trivia in our unknown stories behind everyday icons, but now that it's come up again, we felt it deserved some extra attention. And designers' reactions on Twitter prove that if you didn't know it already, we're about to blow you away. (If you'd like to try out the ampersand in a range of different fonts, check out the best free fonts around).

I was today years old when I learned that an ampersand (&) is a ligature for the word 'et' pic.twitter.com/3xaXMyhlwPJanuary 31, 2020

Editor and author Sarah Pappalardo explained the secret behind the symbol with a tweet that has sparked astonishment in the Twitter world. She pointed out that the ampersand is a ligature (a combination of two or more graphemes tied together, if you're not in the know), for the word 'et'.

Reactions on Twitter cover the history of the word itself.

And people sharing when they first found this out (those clever clogs are very much in the minority, though, we have to say).

I learned this in 1985 at the Globe Theatre in London, reading old documents about the Great Fire of 1666, which used “&” written out so you could see it was “et c.” It was revelatory and made quite an impression on me (as you probably can tell).January 31, 2020

Other notable ligatures include those representing 'ae' and 'oe', but we reckon there are none so well-known and visible as the ampersand. Another interesting nugget is that the symbol used to come at the end of the alphabet, making it a character in its own right that children would recite up until the 1800s. You can find out even more in the below video. Who knew there was so much to discover about the curly 'and' symbol?