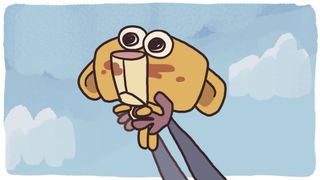 Disney's weird sort-of live action CG remake of The Lion King might have unsettled plenty of fans by transferring the action from the African plains to the uncanny valley complete with creepy almost-realistic character design, but that doesn't seem to have done it any harm.

Despite decidedly mixed reviews that have criticised it for being a joyless retread of the original – not to mention its typographically-infuriating logo – the remake is absolutely killing it at the box office and looks set to make a lot of money for Disney.

Before you grudgingly head out to watch it, though, here's a little something that could save you approximately 116 minutes of your life, and that's not including the time it'll take you to get to the cinema and back. It's the work of Dutch animator Cas van de Pol, and it crams the entire Lion King story – or at least the salient bits – into a breakneck two minutes of glorious cartoon fun.

Cas has called it The Ultimate "The Lion King" Recap Cartoon – we prefer to think of it as Tiny Lion King – and it does the job absolutely perfectly. Not only does it cover just about every major plot point that you need to know about, it's also fantastically executed.

There's a wonderfully rough and ready look to it that reminds us more of the work of animators such as John Kricfalusi and Butch Hartman than anything Disney has ever put out, and there are some brilliant comic beats along the way.

It's a whole lot of fun, and not only is it a great alternative to trudging out to see the remake, it's also the perfect way for anyone who somehow has never actually seen The Lion King – apparently such monsters really exist and actually walk among us – to get up to speed on the story without much effort.

The really impressive thing is that van de Pol animated the whole two minutes of Tiny Lion King single-handedly, with other artists stepping up to provide the music, sound design and stunning voice work.

You can find more of Cas van de Pol's work on his YouTube channel, and if you want to support his endeavours then there's a Patreon page here that you can sign up to.