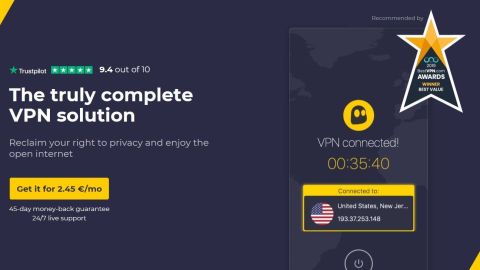 CyberGhost is a solid platform for torrenting and accessing geo-blocked services, although caution is advised if your primary concern is privacy.

Founded in Romania, CyberGhost is a typical VPN provider that's thrown quite a few additional features into the mix. Its teams in Romania and Germany cater to a user base consisting of more than 30 million people across the globe, and its service is a strong contender for the prize of best VPN.

CyberGhost offers its services under four pricing plans. The most expensive is the one-month plan at $12.99/£10.29, followed by the one-year option at $5.99/£4.59 per month. The two-year subscription is available at $3.69/£3.09 per month, while the most cost-effective choice is the three-year subscription option at $2.75/£2.10 per month. For an additional $5/£4 a month, you can get a dedicated IP address. The subscription plans can be paid for using credit cards, PayPal, and Bitcoin.

If you first want to give the service a test run, there are several options at your disposal. If you sign up using a Windows device, you have the right to a one-day free trial. This period increases to seven days if you choose an iOS device for signing up. If you download the app on your Android device, you get a seven-day free trial, without even needing to sign up.

CyberGhost currently offers access to more than 4,500 servers in 55 countries. Its platform covers the usual features but also some more unusual ones.

One of the common tools employed is a kill switch, which shuts down your entire Internet connection if the VPN connection suddenly drops, protecting your data from prying eyes. Another typical option is split tunneling, a feature that allows the user to route some apps through the VPN tunnel, and leave others on your main Internet connection. CyberGhost has this feature on its Android app only.

As for the less than typical features, there are plenty. First of all, the Windows app interface allows you to choose your VPN profile (such as Surf Anonymously, Unblock Streaming or Protect Network), each of which has its own set of features.

For instance, the Surf Anonymously profile allows you to enable the automated HTTPS redirecting, preferring encrypted HTTPS connections instead of the unencrypted HTTP connections to websites. All clients except the iOS one also feature a blocker of ads, trackers, and malicious websites.

Data compression is an especially useful feature for mobile devices, as it saves you money by reducing the amount of data transferred through CyberGhost’s VPN tunnel.

Servers can also be filtered according to their purpose (torrenting or streaming), by the number of concurrent users, by country, and more.

Not only can you connect up to seven devices at the same time, but you can also install CyberGhost on one of the select routers, allowing you to connect an unlimited number.

Privacy is guaranteed with the help of OpenVPN, PPTP, L2TP-IPSec, and IKEv2 transfer protocols and military-grade encryption provided through the 256-AES algorithm

CyberGhost also provides sturdy DNS and IP leak protection and a special system of servers called the NoSpy servers. These are physically located in Romania and are therefore safe from any snooping governments and regimes. Additional advantages of these servers include higher speeds, increased bandwidth, and backup generators that ensure they are always on, even in case of a power cut.

The no-logs policy states the usual - there will be no monitoring or retaining of any kind of traffic information, connection logs, or IP address during the usage of the provider’s platform. Although this can’t be confirmed and you just have to trust CyberGhost on this, the company does publish annual transparency reports listing all the DMCA complaints and police data requests it receives, with an aim to give you peace of mind.

That said, Restore Privacy has voiced some concerns around CyberGhost users’ privacy and security. These concerns, among other things, refer to session-recording scripts on the provider’s website and collection of statistical data through third parties.

CyberGhost’s performance has some issues, such as slow download speeds for servers further away from the user device’s location. Longer connection times are also common, although this doesn’t affect the overall usefulness drastically.

One of the most common requirements stated by VPN users is the provider’s ability to offer them access to popular geo-restricted streaming services like Netflix, BBC iPlayer, Amazon Prime and HBO. CyberGhost excels in this area, supporting a vast choice of such services and websites.

The provider allows safe and unlimited torrenting on its P2P-enabled servers, even helping you get the most out of it with a filtered list of such servers offered in the apps themselves.

CyberGhost can be set up on a wide array of platforms, including Windows, Android, iOS, Mac, Linux, Fire OS, Chrome OS, Raspberry Pi, routers and more. Additionally, you can install a browser extension if you’re using Chrome or Firefox.

The clients for major platforms can be found on the website, in addition to manual installation guides for all other supported devices. All the clients are user-friendly and intuitive, even for a beginner.

Help is available in numerous forms. You can try browsing or searching the website’s support section, or simply reach out to the company’s helpful customer service agents. They are available 24/7 via live chat and email.

CyberGhost offers plenty of features at a low price but does little to instill confidence in its privacy-related capabilities. The platform is a great choice if you’re focused on limitless torrenting and streaming on a high number of devices at the same time.

However, in some cases, it offers only a one-day free trial, which is far from enough to fully test out the service and check if it’s right for you. The fact that this period differs from one platform to another adds unnecessary confusion. The overall performance is satisfactory although not without its own problems. Thankfully, the support staff is always there to help you out.

CyberGhost is a solid platform for torrenting and accessing geo-blocked services, although caution is advised if your primary concern is privacy.