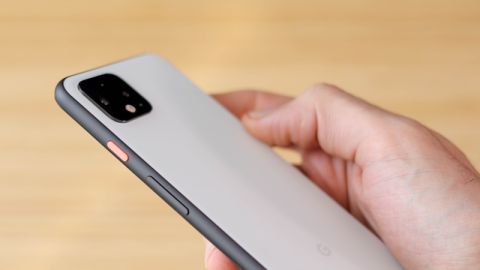 The Google Pixel 4 is a decent phone, looks fantastic in white or orange and has a stellar camera, but for a Pixel and for the price, it falls short. Its battery is weak, many of its features feel like gimmicks and now that the latest iPhone can capture stunning night photography too, the series is less special than it once was for creatives.

The Google Pixel 4 and 4 XL have landed; they’re the latest best camera phones in a line once renowned for having iPhone beating cameras, but times have changed. Apple has finally upped the imaging ante with its iPhone 11 Pro. It has an ultra-wide, GoPro-a-like camera, which the Pixel 4 doesn’t, and it’s also catching up when it comes to night photography too.

The competition from other Android phones is also fierce, with the Galaxy Note 10 Plus delivering one of the best on-the-go creative solutions around, and the OnePlus 7T packing in more and costing less. The question is, should you still be considering a phone that’s made by Google in 2020? Let's find out.

We filled up the 64GB Pixel 4 with photos and videos in less than a month. If you’re big on imaging, therefore, 128GB is the way to go.

We love the playful design of the Pixel 4 and 4 XL. Available in three colours, black, white and orange, the latter two have a matte glass finish, while the black one is high-gloss-glass. Not only does the black one look more traditional and less exciting, but it also clings onto fingerprints, so gets grubby very quickly. The other two, by contrast, always look fingerprint-free and their high-contrast aesthetic with the Pixel 4’s black frame pops in just the right way.

The screens of the Pixel 4s look very good indoors, and they’ve got all the acronyms you’ll want from a phone display - 100% of the DCI-P3 colour space is covered and they support HDR video playback too. With their 19:9 aspect ratio, movie watching on both is a treat, with the Pixel 4 screen measuring 5.7 inches (the iPhone 11 Pro is 5.8 inches), while the Pixel 4 XL measures 6.3 inches (the iPhone 11 Pro Max is 6.5 inches).

Whichever Pixel you go for, they’re both sharp, but are not as bright as the best out there, so outdoor viewing isn’t fantastic.

Above the screen are sensors that detect movement. These can also scan your face just like an iPhone 11 Pro’s Face ID, replacing the fingerprint scanner found on the Pixel 3. This is more secure than traditional Android face unlocking, and Google has added some functionality beyond security: wave your hand over the phone when music’s playing and it skips a track. Shoo a phone call away, and your phone’s ringer is silenced. These features work most of the time, but they’re definitely not a reason to pick up these phones.

What’s most exciting about any Pixel is the camera, and the Pixel 4 and Pixel 4 XL are the first to feature two around the back, a regular wide angle and a telephoto module. These are 12.2MP (f/1.7, 28mm) and 16MP (f/2.4, 45mm) respectively, and, unsurprisingly, are excellent performers.

Google’s special sauce of software smarts means that creatives who want an incredibly reliable smartphone camera can pick up a Pixel 4, point, shoot and be confident they’re getting amongst the best images possible from a phone, every time. That Google’s included a zoom lens is handy, and when you punch in on your subject, the Pixel outperforms the new iPhones.

There’s also a clever new UI option to adjust highlights and shadows separately before you take your shot, and this is for challenging subjects like black cats - potentially the difference between a bad photo and a great one.

As for Night Sight, Google’s night mode, it’s still amongst the best out there. Apple has closed the gap, and for anyone who is a straight-up point and shoot photographer, whichever you go for will deliver. That said, if you like dabbling in astrophotography, Google’s night mode edges ahead with its 4-minute exposure time when held perfectly still.

That’s not the whole story though; Apple has recently updated its iPhone 11 Pro with Deep Fusion. This improves the phone’s ability to grab textures, and clarity from an iPhone camera running this update is sharper than the that captured by Pixel. Graphic designers or anyone who works with fabrics or grains would probably benefit more from an iPhone camera as a result.

Flipping it back to the Pixel, it has a better selfie camera, which clocks in at 8MP and unlike the iPhone, features its own night mode. Finally, for video recording, it’s back to the iPhone 11 Pro, which obliterates the competition with higher framerate capture (60fps versus the Pixel’s 30fps), and better results across lenses and lighting conditions.

The Pixel 4s are powered by a Snapdragon 855 processor which is coupled with 6GB RAM, and that’s plenty powerful for everything from mobile gaming to on-the-go video or photo edits.

The phones also support fast charging and wireless charging too, which is handy, and just like the iPhone 11 Pros, are IP68 water and dust resistant. They both run Android 10, the latest version of Google’s mobile OS, so offer excellent app support and a clean look and feel. In turn, Adobe’s range of mobile creative apps all works to perfection on the two flagships, though unlike phones like the Note 10 Plus, neither feature pen support.

The worst thing about the smaller Pixel 4 is its terrible battery life. If you’re thinking about a Pixel, we’d recommend you opt for the Pixel 4 XL for this reason alone.

As we mentioned earlier when running through storage options, we’d also recommend you go for the 128GB version - and an XL with 128GB is a spec that’ll set you back by £929 - that’s a lot of money for a good smartphone with a sensational camera.

Google Pixel 4 review: Should you buy it?

The Pixel 4 and Pixel 4 XL are decent phones in isolation - they look great, literally have stellar cameras if you’re into astrophotography, and are as powerful as they need to be. In a year when even Apple is upping the ante with its iPhone 11-series and delivering much better imaging and battery performance, this time, Google just hasn’t done enough to retain its camera crown or make its latest handset a no-brainer.

The Google Pixel 4 is a decent phone, looks fantastic in white or orange and has a stellar camera, but for a Pixel and for the price, it falls short. Its battery is weak, many of its features feel like gimmicks and now that the latest iPhone can capture stunning night photography too, the series is less special than it once was for creatives.