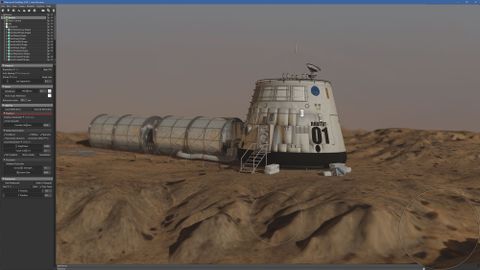 Marmoset Toolbag 3 is a steal, and could become a staple in your workflow. It's recommended for anyone in need of a speedy and intuitive PBR real-time renderer.

It doesn’t matter how big your pipeline is, how small your toolkit may be, or how experienced you are: chances are that if you’re into 3D art, there’s a copy of the real-time PBR renderer Marmoset Toolbag on your system. Where Toolbag 2.0 was all about showing off the model, 3.0 lets you dive into scene workflows with much greater ease, taking you from baking to animating, with shader, fog, lighting and rendering improvements in-between.

This makes it very easy to achieve anything from good-looking portfolio renders to rapid character or look development output. The standalone viewer and direct upload link to ArtStation don’t hurt, either.

Starting with the baker, the workflow is easy: simply click the Loaf icon in the menu, set up your high and low-poly mesh, tangent space options and cage settings, then define your output. As of version 3.04, Toolbag has image quality improvements and now supports multiple texture and material groups, enabling you to bake items with different UV layouts, although it doesn’t support UDIM yet.

If you’re new to Toolbag, note that the materials of an item are ‘hidden’ in the group items in the object list on the left, and they’re not always visible. Also, if there’s a shared material group across groups, you may need to duplicate them in the baker for your bake. This is fine on simple models, but can quickly turn into a drag-and-drop pain on more complex models with lots of groups and materials.

One solution could have been a search and select function similar to 3ds Max or other applications, and then with the ability to drag the results to the respective bake groups. Bar this, it’s a robust addition to Toolbag and its output is fully on par with that of other applications like Quixel or Substance.

The native baker complements the new shaders: Toolbag now supports material groups in the UI, meaning your groups and material groups don’t need to have the same name any more, something that could get annoying in 2.0. In addition, Toolbag now comes with some excellent shader improvements, like custom shaders, tiling, material animation, Substance 2018 support and the updated SSS (skin) shader.

The custom shader enables users to code their own shader setups by letting them override the native Marmoset ones. Based on HLSL and GLSL you can create and load the exact shaders and inputs you need for your projects and renders.

The SSS shader is equally easy to use, just remember to set up decent lighting to show off your shader and Marmoset’s new advanced translucency options. This is where the baker came in super handy: I’d forgotten to bake a thickness map, and now I did not have to switch apps to bake one out. Together with the ability to load SBSARs from the Extra tab and the fact that you can now animate your textures, the shader overhaul also opens for one of the main features of the 3.0 release: animation.

Whereas Toolbag 2 only had turntable options, version 3.0 came with an animation and keyframe editor in 2016. The latest version 3.04 improved on this, and now also makes animation life easier on users by allowing animated meshes to be stored in the TBSCENE file, as well as some serious performance enhancements.

While a toolkit like this won’t ever provide the entire range of animation features like Max, Maya, Houdini, iClone and the like, it will let you animate small to medium scenes, and excels at it, meaning you can do anything from dioramas, interiors, exteriors and single to multiple figure animations.

It’s pretty intuitive as well – you can import your animation or set one up from scratch, and if you’ve animated in any of the mainstream animation packages, you’ll feel right at home in the editor. It also has a cool little feature that lets you hook up your turntable to the animation you’re working on, in effect allowing for multiple turntables at various speeds in your scene.

Add to that the fact you can now import TBSCENE formats into Unreal, a glTF exporter, lots of lighting and shadow improvements, not to mention fog, a shadow catcher and a good, standalone 360 WebGL viewer that works with anything from WordPress to ArtStation, and you have a crazy solid PBR rendering package at a fraction of the price of KeyShot or Clarisse.

Despite its limited functionality compared to other applications, it should be taken into account that whatever Toolbag does, it does it very well. With this attention to detail and user requests, Marmoset Toolbag 3 is a steal.

Toolbag is a staple in my day-to-day workflow. I’d have given it a 5 rating if it weren’t for some of the clunkiness in the baker UI. But with that speed, ease and long list of features, I’d heartily recommend it to anyone in need of a speedy and intuitive PBR real-time renderer.

Marmoset Toolbag 3 is a steal, and could become a staple in your workflow. It's recommended for anyone in need of a speedy and intuitive PBR real-time renderer.