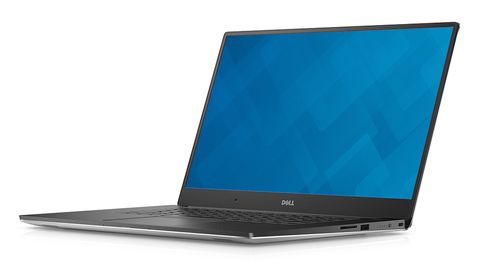 The Dell Precision M5510 balances mobility and power to deliver a serious performance users can take out and about.

Dell has been producing notebooks specifically designed and configured for professional use for years. Most have been sizeable and chunky, but the M5510 weighs in at just a whisker over 2kg. This isn’t excessive for a 15.6in notebook, and makes the M5510 within the bounds of possibility as an everyday portable.

Central to our M5510 sample is its Xeon E3 processor, although there are also Core i5 and i7 options as well. All are from the latest Intel Skylake generation, and in the case of the Xeon, the E3 provided is the 1505M v5. This runs at a nominal 2.8GHz, but there’s a top Turbo mode of 3.7Ghz, which should make it very good for modelling. It’s also a quad-core processor, which Hyper-Threading turns into eight virtual cores, so it should be passable for rendering, as notebooks go.

Dell sent our M5510 with 16GB of 2,133MHz in two 8GB DIMMs, so it could take advantage of the processor’s dual-channel memory ability. This should be enough for the kinds of applications this notebook will be running during its lifecycle. Although the processor sports reasonable Intel HD P530 Graphics on board, this won’t be up to professional applications, so Nvidia Quadro M1000M mobile workstation graphics have been included as well, to provide some serious 3D acceleration, and there is no other option.

There are two screen options, however, with the base one being a 1,920 x 1,080 IPS panel. But for £189 you can have the UHD panel our sample came with – an iridium gallium zinc oxide touch display offering a resolution of 3,840 x 2,160. Detail is incredible, although perhaps a little excessive for a 15.6in screen, and Windows 7 looks a little silly at this resolution.

There are lots of storage configurations available with this model, with one M.2 PCIe slot and one 2.5in SATA bay, allowing up to two 1TB devices. Our sample was equipped with a decent 512MB Hynix SC210 M.2 SATA solid state disk, which offers quick reading and writing – but not as fast as the PCI Express SSDs which are also available as options.

There isn’t a huge range of connectivity, but the notable inclusion is Thunderbolt 3, which uses an identical connector to USB Type-C and can drive two 4K monitors at 60Hz with a throughput of 5GB/sec.

Performance is very good considering the chassis size. The result of 644 in the rendering portion of Maxon Cinebench R15 might be a little behind the Workstation Specialists WS-M150, but that had a desktop processor, and we haven’t seen many faster mobile CPU-equipped workstations. The OpenGL result of 88.81 is again behind the WS-M150, but the latter had higher-end graphics. In SPECviewperf 12, highlights include 38.12 in catia-04, 31.84 in maya-04, and 55.86 in sw-03, all of which are commendable for a notebook.

We also ran the Creative and Work portions of Futuremark’s PC Mark 8 to test battery life, where the M5510 managed to last 105 minutes and 172 minutes respectively. However, our unit was supplied with the lesser 56Wh three-cell battery, and there’s also a 81Wh six-cell option for £81.90 extra, which should give a very respectable 2-3 hours of creative work or 4-5 hours of less strenuous applications.

Overall, the Dell Precision M5510 is a decent balance of mobility and workstation power. It’s not cheap at over £1,800 plus VAT for our specification, but it will fit the bill nicely if you need to take serious performance out on the road.

The Dell Precision M5510 balances mobility and power to deliver a serious performance users can take out and about.