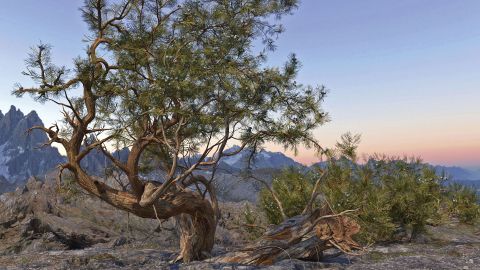 Cheaper but much more powerful, with results that stand up to the closest inspection, the latest SpeedTree is essential if you need realistic foliage.

Used by the likes of ILM, Digital Domain, Sony Imageworks, Activision, BioWare, Guerrilla Games and many more, SpeedTree is pretty much the industry standard for the creation of vegetation in visual effects and video games. So what has changed in version 8 of the VFX-focused Cinema edition?

However, you can rent the app, starting from $200 for three months, and buy individual VFX plants for anything from $8 up to $75 for a species pack.

One of the big upgrades to SpeedTree is the move to PBR (physically based rendering) materials, with a new non-destructive workflow in which you can alter the colour, hue and contrast of textures without having to leave the app.

This is accompanied by a brand-new library of 150 trees, bushes and plants, which have been scanned from real-world examples at an arboretum in North Carolina.

By employing a mixture of 4K and 8K textures, you get truly beautiful results, but while the SPM files are fairly lightweight, the multitude of high-res textures means that many of the samples weigh in around the 250MB mark (compared to around 25MB for SpeedTree 7 models).

The exported FBX and associated textures can be larger still depending on the format used, so there's quite a step up in terms of pushing data around. It even takes a while for the app to stream in all those high-res textures.

Despite all this, one of the most dramatic effects of this update is that SpeedTree's preview is faster and more accurate. Not only do the models look even better than in version 7 – especially with the high-res PBR textures – optimised generators and a new leaf rendering system means the app is much faster and more responsive.

Even the most densely populated trees can be manipulated with ease, which makes it much easier to edit on the fly and see the results as you work.

A side effect of the new optimisations is that the overhauled wind system –
which now creates more natural-looking wind effects – also previews much more quickly, enabling you to see the result playing in real time and still navigate around the scene. A 1.1-million-poly mesh in SpeedTree 8 was smooth and highly responsive, while version 7 could only manage two or three frames per second with wind activated.

One really cool new feature is the Season slider. As you drag from spring through to winter, the leaf textures change accordingly – but there's also a checkbox to show leaves that have fallen to the ground. These are exported with the mesh and so it's a great timesaver if you're doing autumn scenes, although it only works with SpeedTree models that have seasonal variations built in.

New branch modelling features have also been added, enabling you to control the form of the tree with a sphere or imported mesh shape, and you can add decorative elements like knots, lumps and cavities – although we wish it was easier to control their position, without endless trial and error.

On that note, another minor criticism is that there's a lot of dialling in of figures, and the arrow buttons that increase and decrease values often do so in such tiny increments that they're not worth using. It would be good to have a multiplier hotkey that increases the increment by a factor of 10 (or more), to make experimentation a bit easier and avoid so much number typing.

On top of version 8's major changes there are lots of little enhancements, too: a better layout with neater UI; a mesh preview in the loading panel; nicer material previews; preset lighting setups; and a Cutout Editor that lets you create your own 2D leaf, frond and twig meshes inside SpeedTree, without the need for any external apps.

But the main takeaway here is that SpeedTree 8, in combination with its new library, creates the most beautifully detailed vegetation, which – unlike those of its predecessor – stand up to really close examination with the camera just inches away.

Regular users of SpeedTree may well have wondered if the suite had been left to wither on the vine, but this root-and-branch overhaul sees it back in full bloom.

This article was originally published in issue 230 of 3D World, the world's best-selling magazine for CG artists – packed with expert tutorials, inspiration and reviews. Buy issue 230 here or subscribe to 3D World here.

Cheaper but much more powerful, with results that stand up to the closest inspection, the latest SpeedTree is essential if you need realistic foliage.