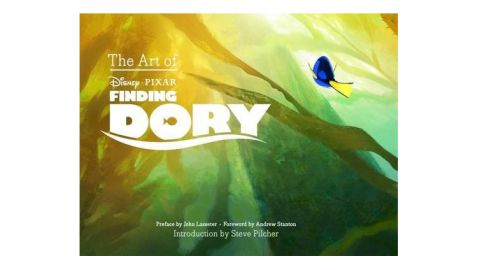 Packed with beautiful artwork from one of the world's most renowned studios, The Art of Finding Dory is a fascinating book filled with insightful details.

You’d expect an animated sequel would be relatively easy to design and produce. You just have to copy what went before, right?

Wrong. For Finding Dory, Pixar couldn’t just reuse the previous character and environment designs, explains production designer Steve Pilcher in his introduction to this book. For one, 13 years of technological advances mean the original pieces no longer fit with the audience’s visual expectations. For another, the film makers didn’t just want to retread old ground, but aimed to explore new artistic and narrative possibilities.

This sets the scene for a detailed look into how the sequel to Finding Nemo was visualised, alongside a cornucopia of unseen art, from scrappaper sketches and early storyboards through to digital paintings, pre-vis models, 3D sculpts and final frames.

But even if you’re not interested in that stuff, this book is worth buying just for the stunning artwork by the likes of Shelly Wan, Tim Evatt and Don Shank, all beautifully reproduced across the book’s 176 pages.

This article was originally published in ImagineFX magazine issue 140. Buy it here.

The Art of Finding Dory

Packed with beautiful artwork from one of the world's most renowned studios, The Art of Finding Dory is a fascinating book filled with insightful details.