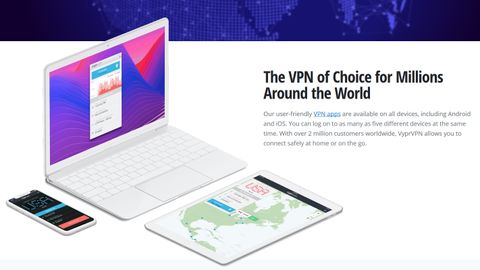 VyprVPN is a solid performer that aces in almost every area of the service. It provides all the expected features with excellent speeds. However, the lack of clarity on the refund policy is a bit worrying, and the three-day free trial doesn’t provide much time to test the service out to the fullest.

The product of the Swiss cybersecurity giant Golden Frog, VyprVPN was created in response to governments’ spying of people and entities, and its commitment to security has resulted in a high score and a place in our list of the best VPNs in 2019.

VyprVPN offers two types of subscription: Standard and Premium. These are available under either a one-month or a one-year plan.

The Standard monthly subscription comes at a price of $9.95 (about £8), while the Standard yearly plan costs $5 (about £4) per month.

The Premium account’s one-month plan will cost you $12.95 (about £10), while the annual option is a lot cheaper: $6.67 (about £5) per month. Accepted payment methods include PayPal and credit cards.

The free trial is a very short one – you only get three days to try out the service and see if it’s the right fit for you. Moreover, you still have to sign up for a subscription; you just aren’t charged for it during the first three days. You have to cancel your subscription if you don’t want the provider to charge you for the full subscription.

The website makes no clear mention of any money-back guarantee, so it’s difficult to say if you’ll be issued a refund if there’s a problem with the platform.

VyprVPN has over 700 servers in more than 70 locations. On top of that, it has 200,000 IP addresses that you will have access to if you sign up for an account. It's one of the rare tier-one VPN platforms, which means it owns and manages all of its servers. This means that the provider’s servers deliver higher speeds and better connection stability than others’.

VyprVPN lists the usual features. A kill switch is activated when your VPN connection is disabled, blocking all internet traffic on your device so that your private information remains safe.

A split-tunneling feature, called Connection Per App, lets you select which apps will be directed through the VPN tunnel and which will be left outside of it, on your regular internet connection. An additional option is available - selecting which apps will connect only when the VPN is on.

The provider’s Android app deploys URL filtering – a tool that keeps malicious websites away from your device.

The VyprVPN Windows client is equipped with a built-in speed test, providing users with accurate information about the VPN connection speeds.

The Standard subscription supports up to three simultaneous connections, while the Premium one allows you to connect as many as five devices at the same time. The Premium account also comes with the VyprVPN Cloud – an added layer of security when accessing cloud servers, currently available for Amazon Web Services, DigitalOcean, and VirtualBox. The maximum number of simultaneous connections can be further increased by installing the service on one of the supported routers.

The military-grade privacy protection is guaranteed by the use of the impregnable 256-bit AES encryption algorithm and multiple connection protocols. These include OpenVPN, PPTP, L2TP/IPSec, as well as the company’s proprietary Chameleon protocol.

Chameleon is only available to Premium users. It uses the unmodified OpenVPN protocol and scrambles the metadata in order to bypass snooping and restrictive practices such as deep packet inspection, VPN blocking, and throttling. Chameleon is available for Windows, Mac, Android, and routers.

An additional level of security is provided by NAT Firewall which runs on all of the provider’s servers and blocks all unrequested inbound traffic when you’re connected to VyprVPN. This protects you from identity theft and spamming caused by malware that may reach your device through Internet connections left open by your applications.

VyprVPN’s no-logs policy adamantly states that it doesn’t track or retain any user activity while connected to the service. While many VPN providers claim the same, they often make no effort to prove it. VyprVPN, on the other hand, has hired an independent firm to conduct a full and complete audit confirming its absolute devotion to transparency. The provider passed the audit with flying colors.

The VPN connection times and speeds are superb. The connection is not affected by any instabilities or errors. That said, some latencies can occur when using certain, more distant server locations but this issue doesn’t particularly affect the overall performance.

VyprVPN prides itself in providing its users with unlimited access to services that are unavailable in certain regions. These services include the ever-popular Netflix, as well as BBC iPlayer, Hulu, HBO, and Amazon Prime. If you encounter problems while trying to access any of these services with VyprVPN, the website has resources to help you out.

Although not heavily advertised, torrenting is allowed while using VyprVPN’s platform. If you dig around the website a bit, you’ll find that this is substantiated by the company’s assertion that: “Because our service treats all traffic equally, peer-to-peer and BitTorrent traffic is allowed.”

VyprVPN supports the installation of its software on a long list of devices. Therefore you can download clients for Android, iOS, Windows, and Mac, as well as install the service manually on Linux, Blackberry, QNAP, Anonabox, Blackphone, and various smart TVs and routers.

The installation of the clients on major platforms is intuitive and simple but if you do get stuck somewhere, help is available on the website or via customer support. The website’s help section also provides manual installation guides for all other supported platforms.

In addition to the exhaustive support section on the website, VyprVPN also has knowledgeable customer support experts at your disposal 24/7. You can reach them via live chat on the website or email.

VyprVPN is a solid performer that aces in almost every area of the service. It provides all the expected features with excellent speeds. However, the lack of clarity on the refund policy is a bit worrying, and the three-day free trial doesn’t provide much time to test the service out to the fullest.