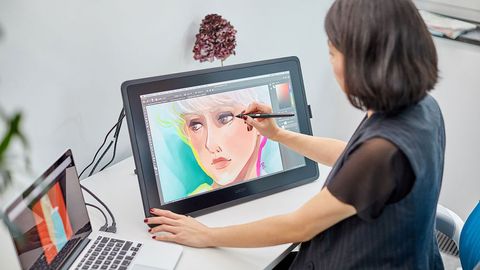 The Cintiq 22 has the lowest price Wacom has ever offered for a drawing display of this size, with a well-judged feature set that enhances your drawing comfort. You can still get similar products for less, but Wacom’s emphasis on quality makes this a compelling option.

The Wacom Cintiq 22 is the latest model in the company's drive to make this famous digital art brand a whole lot more affordable. Within Wacom’s overall product line of electronic drawing aides, many of which can be found in our round up of the best drawing tablets, the Cintiq is a flat-screen display for your computer, which you can draw on with the provided stylus.

The range is neatly divided into two: Cintiq offers relatively basic displays at lower prices, while Cintiq Pro provides a premium experience – particularly a 4K display in larger models – with prices to match. The Cintiq 22 joins the Cintiq 16 in the more affordable sector.

The Cintiq 22 offers a full HD screen (1,920 x 1,080 pixels) – the same screen resolution as the smaller Cintiq 16. That immediately means there’s an important trade-off between the two: the Cintiq 22 gives you a physically larger drawing area for more comfortable, expressive arm movement while drawing, but the screen image is less sharp than on the Cintiq 16.

While the picture on the Cintiq 22 is a little soft compared with other Cintiq models, it’s comfortable to work from – and in all other respects, the drawing experience is excellent. The larger size compared with the Cintiq 16 really matters when you’re in an extended drawing session: it frees you up to make more extensive pen strokes.

Apart from resolution, the other potential drawback of this display compared with the Cintiq Pro line is the colour gamut – how many colours the screen is capable of displaying. The quoted gamut for the Cintiq 22 is 72% NTSC, which puts it in the same league as a budget monitor. Cintiq Pro displays have a colour gamut of 94% NTSC. While that technical difference sounds damning, bear in mind that the Cintiq 22 is able to present 96% of the range of colours supported by the sRGB colour profile, which many designers and illustrators apply to their images by default.

The Cintiq 22’s screen surface is well-considered. The anti-glare glass surface is laminated to give it a slight texture, which gives a pleasing sense of bite as you move the stylus across it.

The technology that enables the Cintiq 22 and similar drawing displays to work means there are two planes you interact with: the glass you draw on, and the actual screen presenting the image you’re drawing. Too great a gap between the two leads to a disconcerting disconnect between the point of your stylus and where your pen mark appears on-screen. The Cintiq 22’s gap is perfectly acceptable, although you don’t get the almost supernatural sense of connection the advanced optical bonding technology of a Cintiq Pro gives you.

The provided stylus, the Pro Pen 2, is easily capable of capturing your creative gestures: it offers 8,192 levels of pressure-sensitivity, as well as tilt sensitivity, where the angle at which you hold the pen affects the stroke. The stylus doesn’t need a battery either: it takes the power it needs from the electromagnetic properties of the screen. The same is true of the pen that comes with the rival Huion Kamvas Pro 22, but the cheaper XP-Pen Artist Display 22E Pro’s pen requires periodic recharging.

While there are other Wacom pens available, few artists should have any complaints with the functionality of the Pro Pen 2, and it has a satisfying heft that makes it comfortable with draw with. The Cintiq Pro line comes with the same pen, although the Pro’s advanced drawing surface allows the use of soft felt nibs.

While conventional drawing tablets without a display, like Wacom’s Intuos line, are capable of working over a wireless Bluetooth link, that isn’t yet realistic for a combined tablet and display. The Cintiq 22 uses USB-A for its drawing tablet connection, so you need an adaptor if your computer only has USB-C ports; and HDMI for its display connection.

Wacom Cintiq 22 review: Should you buy it?

The older Cintiq 22HD has a stand that rotates as well as tilts, plus ExpressKey shortcut keys to help you access favourite commands in your chosen software. However, the newer Cintiq 22 has a superior pen and a matt rather than smooth screen surface. As well as the price drop, you get a materially better drawing experience. If you miss the 22HD’s shortcut keys, you can buy Wacom’s ExpressKey Remote for $100 / £100 / €130 for the Cintiq 22.

The benefits of the Cintiq 22 compared with the Huion Kamvas Pro 22 and the XP-Pen Artist 22E Pro are more intangible. They’re a pretty close match for key features, although both rivals offer built-in shortcut keys. The Cintiq 22 still has a better overall feel, however, with superior build quality in both the display and the pen. You have to weigh up the immediate gain of lower prices against the longer-term benefits of the Cintiq 22 just feeling a little more satisfying to work with. It’s a distinction that may not wash with the Cintiq 22’s target audience of students, keen non-professionals and jobbing artists.

The Cintiq 22 has the lowest price Wacom has ever offered for a drawing display of this size, with a well-judged feature set that enhances your drawing comfort. You can still get similar products for less, but Wacom’s emphasis on quality makes this a compelling option.