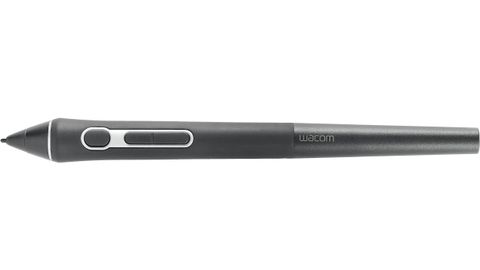 With a strong build that's also comfortable to use for hours on end – not to mention 3D-friendly functionality – the Wacom Pro Pen 3D is a welcome step up from previous models.

Built on the foundations of the Pro Pen 2, the Wacom Pro Pen 3D is only partially a new device. This means that it benefits from many similar specifications to its sister product, which is itself a step up from the, already excellent 3d art tool, the Wacom Pro Pen.

The physical product is very similar, utilising the same materials and design aesthetic, with combinations of hard plastic body and bezels, with soft-touch rubber buttons and grip. It feels sturdy and robust for prolonged sessions at the tablet but is light enough to not encourage too much fatigue. The grip itself is well shaped, which aids in this area too (and is also replaceable should it wear out).

The nibs Wacom supply are the same as others in the range and there are a number of spares included in the cigar-like storage case, which is beautifully designed and has two small nubbins to prevent it from rolling off your desk. This case is solid metal with a dense foam insert and should offer protection from most knocks and drops.

In previous iterations of the Pro Pen, along with the nib, there were two buttons under your index finger, with a third at the opposite end, usually set up to switch to the eraser tool in apps like Photoshop CC. This was great for certain tasks but fell short for 3D artists who spend more time modelling.

That's why Wacom developed this version, which removes the rear ‘eraser’ and adds a third button on the side of the stylus, meaning that three buttons fall within easy reach of your index finder. For many 3D applications, this is huge. The buttons can be set up in the usual way, often for simple mouse replacements: left, middle and right click.

The Wacom settings allow full customisation too, so if you wish to create a unique key combination assigned to a button, then that is also possible.

This article was originally published in issue 234 of 3D World, the world's best-selling magazine for CG artists. Buy issue 234 here or subscribe to 3D World here.

With a strong build that's also comfortable to use for hours on end – not to mention 3D-friendly functionality – the Wacom Pro Pen 3D is a welcome step up from previous models.