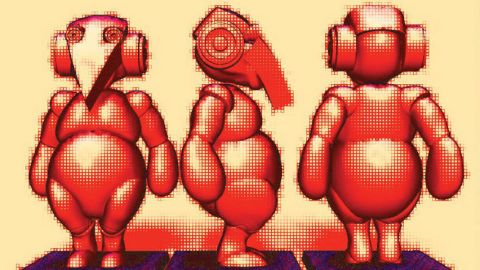 There’s lots in ZBrush 2019 for illustrators, designers and mixed-discipline artists, plus some well-needed additions for 3D artists, such as the improved camera and folders.

ZBrush 2019 by Pixologic has some excellent new features for both 2D and 3D artists. The only downside (for some) may be that it has now migrated to a subscription model. There are monthly and six-monthly options, alongside its one-time perpetual licence offering. The price has grown steadily in recent years, but if you factor in that all upgrades have been free of charge (since the early 2000s), then there is not a lot to moan about.

Plus, having a monthly option is always great news for small studios and freelancers who may need a small number of licences for a short period of time or a specific contract or 3D project (see our pick of inspiring 3D art). Let's take a look at the new tools ZBrush 2019 offers:

Accessed from the Render panel, NPR or non-photorealistic rendering adds a whole new system to change the look of your final renders. The range of styles is actually mind-boggling as there is now a huge range of sliders and settings to choose from and then combine.

You can turn sculpts into a comic style with heavy outlines, overlay textures and paper styles, create hand-drawn effects similar to Photoshop filters or actions and even add halftone effects. This is not a huge bonus for traditional 3D artists perhaps, but it’s a great addition for illustrators and mixed-media artists wanting to stand out from the crowd in a saturated market.

ZRemesher has been through two iterations already and both have been well received. It is essentially an auto retopology tool and it makes quick work of making really high-resolution models usable by giving you a fairly clean topology and edge loops for the most part.

This latest version works better for hard-surface models as it can detect sharp surface angles and even maintain creased edges, as well as giving you polygroups.

One big gripe with the subtool system in ZBrush has always been that you can’t easily group and manage your subtools effectively. This becomes a real issue when you get into hundreds of subtools per character. Good naming conventions helped, but a true folder system was needed and that’s now been added.

Subtools can be placed into folders and there is even a folder setting button allowing you to access lots of folder actions like delete, transpose, merge and Boolean. The ability to move, scale and rotate the whole folder is a real bonus. Having used it for a few days it is a massive help in organising your creations, and it seems a shame that we only have one folder level and we can’t nest them (yet).

Snapshot 3D is an enhancement to the functions found on the Spotlight wheel. Spotlight was introduced to allow an artist to take any image (texture) and project it onto the surface of a model using Polypaint. It came in the form of a wheel that, when activated, allowed you to place the image or portion of the image over your model and then paint through, adding the texture to the surface below.

Snapshot 3D works in the same way and as part of the Spotlight wheel. What’s different is that the textures, rather than applying anything to the model below, allow you to convert the image to a 3D model as a subtool. For example, if you take a greyscale image of a white cube on a black background and apply it through Spotlight, it will create a cube of that shape and size. Using complex greyscale images and the live Boolean function in the SubTool panel enables you to make extremely complex shapes very quickly. It is a novel way to add 3D geometry from 2D patterns and shapes.

The ZBrush camera has often baffled new users as you could argue that it doesn’t really exist in any recognisable way. It is there as we are looking through it when we work, but it has always been seen as a weakness. ZBrush 2019 adds the Universal Camera, which now gives us some of the basic functions we would see in other 3D cameras. There is a focal length control, crop factor and even import and export functions. You can match the focal length of imported photographs and you can save some of the settings to reuse in other scenes. Of course, this now plays well with programs like KeyShot.

Pixologic also added some new plugins, including Intersection Masker, allowing you to use a mesh to mask, and ZColor, which enhances digital painting tasks. ZBrush is still clearly the market-leader in digital sculpting packages, and this 2019 update brings some diverse new features and tools.

Pixologic doesn’t always respond to industry needs, but has a habit of coming up with unique ways to solve problems. There’s plenty in this release for illustrators, designers and mixed-discipline artists, plus some much-needed additions for 3D artists such as the camera and folders.

There’s lots in ZBrush 2019 for illustrators, designers and mixed-discipline artists, plus some well-needed additions for 3D artists, such as the improved camera and folders.