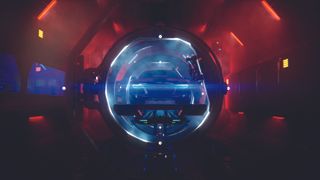 I use Arnold at The Mill, and would like to show you how to render reflective and diffuse surfaces by explaining to you how I used this software for the Audi project where we dealt with a fully CG environment in which these finished were present.

Once we had done the initial look dev, it was time to optimise the scene before we passed the lighting setup out to the 50-plus shots that needing rendering.

This was then used  as an HDRI in an aiSkyDomeLight as the main lighting for our hero objects, which helped with the sampling issues normally associated with rendering interiors.

On most jobs we clamp our max values to around 10 (see Fig.2). This helps prevent fireflies appearing in renders, caused by super bright spots in any maps or lights used in the scene. Also try to avoid lights either cutting through, or very close to, the geometry in the scene.

We also convert all textures in the scene to .tx files. This can speed up the translation of the scene, especially if you are using large textures like HDRIs for lighting, or multiple UV tiles for hero objects and 32-bit displacement maps.

This leads on nicely to something else to check – the Max Cache Size in the textures tab in the Arnold renderer tab (see Fig.3). This is defaulted to 1024Mb, which is more than adequate for smaller scenes, but multiple large texture files, as suggested above, can cause the scene to flush its texture cache every time it reaches the limit.

This article was originally published in 3D World magazine issue 209. Buy it here.