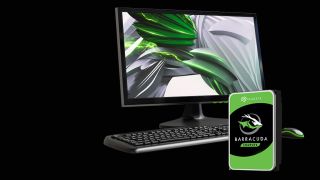 What is an internal hard drive?

If you’re unfamiliar with computer terminology, a hard drive or HDD is a computer’s storage device. That means that its primary function is to store all your computer files, from Word documents and Excel sheets to images, videos and designs. It also stores a computer’s operating system as well as the applications that run on it.

They also vary in read and write speeds. A hard drive contains a spinning disk whose job is to store and read your data. The speed in which a hard drive’s disk spins determines how fast a hard drive is when reading and writing your data.

If you're also after a new computer, don't forget to check out our best laptops for graphic design or get a bargain over at our Microsoft Black Friday or Apple Black  Friday deals hubs.

What should you look for in an internal hard drive?

As we mentioned earlier, the best internal hard drives come in a variety of shapes, sizes and price. They also differ in read/write speeds and connector types. Before you click that buy button, consider these factors when deciding the one that’s best for your needs.

First and foremost, think about the actual space you’ll need. As a creative professional, you might opt for 2TB to 4TB of space, as you deal with very large files. Though if you’re using the internal hard drive as your temporary storage for when you’re in the field or traveling and you’ve got a higher capacity drive at home that serves as your primary storage, a 250GB to 500GB should suffice.

Consider also how fast you need that hard drive to be for your workflow. Especially if you’re a video editor, you’ll want faster read/write speeds as well as a speedy connection. The SATA III connection currently offers the fastest transfer speed.

You can always opt for a pricey internal hard drive with lots of storage space, but if you have limited funds, your options might be restricted if you want a reliable and fast storage device. Luckily, you can count on Seagate’s BarraCuda line to come to your rescue. The 1TB and 2TB models’ platters top at 7,200 rpm, which is faster than many of its rivals on the market. And, that’s for a fraction of the cost of those drives.

Impressed so far? Well, it’s also easy to install and durable. With care, this hard drive will last a long while. If you’re looking for an affordable option, this hard drive will undoubtedly go a long way. Unfortunately, the 3TB and larger models are much slower at 5,400 rpm, so only get those if you don’t need that much space.

If you do, then the Seagate BarraCuda Pro with Data Recovery might be a better option for you. It’s a bit more expensive, but you can go up to 12TB without sacrificing speed.

If speed isn’t as much of a priority as the amount of storage space, then Western Digital’s Blue 4TB PC hard drive is the large capacity option for you. This internal hard drive may not be the fastest, with only 5,400 rpm and a limited cache of 64MB. Yet it still beats competitors with the amount of space it offers for the price. Budget-minded users will appreciate its affordability.

Of course, for such things as video editing, where you mustn’t compromise on speed, you might want to look elsewhere. However, if you deal with a lot of large files like high-resolution images in your day to day, this one’s a winner. It’s also easy to install and surprisingly quiet, so rest assured that noise levels won’t get in the way of your creative workflow. And, since it's a Western Digital drive, it comes with free access to the WD Acronic True Image software, which allows you to effortlessly copy all your old data onto your new drive – a bonus if you’re using this as your backup drive.

The best hybrid drive for the best of both worlds

Seagate has combined the best of both hard disk drives and solid-state drives in one with FireCuda, and it’s considered by many as among the best hard drives in 2019. That’s not surprising, given that this hybrid drive takes the speed of SSDs and puts it in the affordable body of an HDD. Designed with gamers in mind, the Seagate FireCuda 2TB touts the latest NAND flash technology so it’s up to 5x faster than its traditional hard drive rivals. That means that it’s also ideal for video editors and designers.

The limited 2TB storage capacity may not be enough for some, so expect to eventually run out of space if you handle a lot of massive files – medium format shooters, you’ve been warned! But for most, it should be enough. And, if power consumption is a concern, you’ll be happy to know that this one draws less power, reducing its overall power consumption and the heat it generates.

If you’re running a business with a small creative team that share project data on a daily basis, then you’ll need a network attached storage (NAS) system. This enables all authorised users in your network to share and access the same data, which makes your team’s project workflow faster and more seamless. Enter the Toshiba N300 14TB NAS internal hard drive, whose 10TB to 14TB storage capacity should be plenty to share among your team members. Yet, the best part is that you essentially have centralising data storage, forgoing the need to constantly ask a teammate to send this Illustrator design or that Premiere project.

With a cache size of up to 256 MB and 7,200 rpm speed, this won’t slow down even with multiple users accessing it. And, because it is your business, this NAS system comes with features to help safeguard your data, making it one of the best internal hard drives if security is a priority.

The most affordable NAS for budget-conscious users

Small businesses with limited budgets will be happy to know that they won’t have to spend the big bucks for their NAS device. The Seagate Exos X16 delivers just as excellent a performance and as fast a speed as its rivals – not to mention, just as much storage space – but at a much lower cost. Plus it comes with a much longer warranty than the more popular NAS drives.

This internal hard drive has SAS models, which are faster and more reliable, but its hyperscale SATA model has also been tuned for speedy large data transfers. For added protection, Seagate gave its next-generation helium side-sealing, which should protect it from leaks and hard bumps. For added data security, on the other hand, it comes with Seagate’s Secure encryption technology. That’s a lot of features for less.