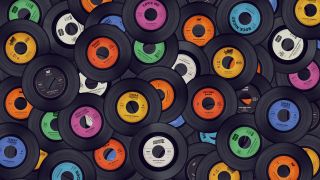 A big part of getting one of the best record players and collecting vinyl’s appeal lies in the collecting and displaying of your favourite albums in big, physical form, but the real reason you should give records (another) spin is for the warmer, richer, downright better sound they offer.

Of course, if you want to do more than just look at your records, you’re going to need a record player – and choosing one is no easy task. Records are a technical, tweaky format that need to be handled and played with care, so while it might be tempting to buy one of those trendy suitcase style turntables, doing so won’t only massively undersell your vinyl, it could even ruin it entirely. So not a good look for your studio or home office (if you are wanting to kit out your studio, also see our post on the best office chair).

The good news is that there are lots of great record players out there. Before buying one you should decide how involved you want to get. Many turntables are fiddly to set up and most require that you physically lower the stylus into the groove to begin a record and lift it at the end. For a lot of people, this is very much part of the charm, but for plenty of others this is a complete turn off. There are now turntables out there for those who don’t have a degree in audio engineering but do still care about sound quality.

If you're looking to improve the sound quality of your life overall, you might want to also check the best noise cancelling headphones.

What to look for in a record player

So what should you look for when selecting the best record player for you? If it’s an easy life you’re after, look for a turntable that arrives as pre-assembled as possible – you’ll almost always need to place the platter and attach a belt, but for some the effort stops there, while for others it’s the tip of a tweaky iceberg. And if you don’t want to feel like a slave to your record player, it’s worth looking for an automatic or semi-automatic model: the latter will lift the stylus from your record at the end (a real godsend if you enjoying a an audio-infused siesta), while the former will also place the stylus at the start of a record for you.

The other big consideration is the phono stage (also known as a phono amp). This is a component that amplifies the tiny signal from a turntable to a level that a traditional hi-fi amplifier can deal with. Every system with a turntable needs a phono stage, but sometimes they’re integrated into the turntable itself, while some stereo amps have one built-in. Standalone phono amps are available, too, and using one almost always results in better sound, but perhaps you’re someone who doesn’t want any more components than is strictly necessary.

You’ll be pleased to hear that below we’ve listed the five best record players that you can buy right now, and every approach is covered. There’s a traditional turntable that sounds incredible but requires a fair amount of effort and plenty of other quality kit in order to shine, there’s a device that looks like a record player but is actually a complete system that includes Bluetooth, and there’s a high-tech deck that’s easy to use and will rip your records to digital files that you can take anywhere. Simply scroll down to find the perfect record player for you.

The best sound-per-pound turntable you can buy

If you really want to do vinyl properly, there isn’t a turntable in the world better suited to the task than this Rega Planar 3 Elys 2. Confused about the name? The record player itself is called the Planar 3, but it’s available with a number of different cartridges (the bit at the end of the tonearm that contains the stylus, or needle) and the Elys 2 is the one we’d recommend.

The Planar 3 is available in white, red and black, and it combines traditional turntable design and elegance in exemplary fashion. This is a quality piece of modern classic hi-fi that’s a pleasure to look at. It’s also a pleasure to listen to, with a sound that no turntable costing under a thousand pounds can match.

But this is also a turntable that only the dedicated vinyl fan should consider. Its operation is entirely manual, it doesn’t have a built-in phono stage and you’ll only make the most of it if the rest of your hi-fi is also excellent. As long as you’re entirely committed, this is more or less the only record player you should consider – and it may well be the last one you ever need to buy.

A complete hi-fi disguised as a record player

This might look like a simple record player, but the Pro-Ject Juke Box E is actually a complete hi-fi in an old-school chassis. A combination of a traditional turntable, full stereo amplifier and Bluetooth receiver means all you need to add is a pair of standard stereo speakers – and many retailers will even sell you a package that includes those.

True, the operation is manual, so you’ll need to place the stylus into the groove of your record and gently lift it at the end, but the Juke Box E also lets you send tunes from your phone via Bluetooth, making it a truly charming amalgam of analogue and digital.

What’s more, it actually sounds like real hi-fi, rather than two wasps fighting over the last drops of sugary syrup at the bottom of a Coke can – which is what you’ll get if you buy that suitcase turntable on Amazon.

A fab first turntable that will even rip your records

If the Rega is a bit too traditional for your liking and the Pro-Ject a touch too all-inclusive, the Sony PS-HX500 is an amazing option. It looks like a proper hi-fi turntable and it sounds like a proper hi-fi turntable, but it’s got the added convenience of an integrated phono stage and it will even rip your records to your computer via USB, so you can take that lovely, warm, analogue audio with you wherever you go.

True, it’s not exactly extravagant in the styling department, but there’s a certain amount of workmanlike charm to the squared, matte black design, and a pleasure to be gleaned from this stealthy, wolf-in-sheeps clothing-like record player. It really does sound good.

The perfect bridge between analogue nostalgia and next-gen tech

Believe it or not, this record player is actually considered 'entry-level' by Technics. That’s because the company is best known these days for its more expensive models. As you can probably tell from the way Technics SL-1500C looks, this is a thoroughly modern turntable that boasts direct drive (no belt to faff with), a built-in cartridge and integrated phono stage. It’s semi-automatic, too, so will lift the stylus at the end of the record - although you do need to place it in the groove at the start.

It’s a delight to live with and use, then, but it also sounds absolutely fantastic. It’s almost digital in the way it digs up detail and performs so precisely, but it still has that lovely analogue warmth to the sound. In other words, it’s brilliant. If you can afford it and take vinyl seriously, you should buy it.

If you’re looking to ease your way (back) into with a really simple, really affordable record player, the Lenco L-85 is the one to buy. Sure, it looks and feels a bit cheap, but that’s because it is cheap - exceptionally so. It comes in some funky colours, too. We’re particularly keen on the grey and red finishes.

This is a semi-automatic, belt-driven turntable with a built-in phono stage and the ability to record via USB. in other words, it’s as plug-and-play as vinyl gets. It even comes with the cables you need to hook it straight up to your existing hi-fi.

It even sounds good. Of course you’ll get better sound by spending more, but the Lenco comfortably outperforms its very low price tag.